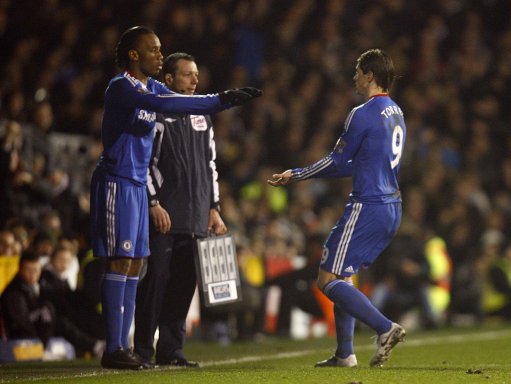 Chelsea manager Carlo Ancelotti has lept to the defence of Fernando Torres, after the pricey striker again struggled to find a foothold for his new side against Fulham last night, eight days after after singularly failing to convince on his debut against former club Liverpool.

The 0-0 draw saw Chelsea fail to reclaim fourth place from Tottenham, who now sit two points clear of their London rivals in the Premier League standings.

Petr Cech saved a 93rd-minute Clint Dempsey penalty to ensure the game ended goalless, though it was another night to forget for Torres who, with his confidence in ribbons, fluffed several decent chances to score before being substituted for (a clearly miffed) Didier Drogba with 20 minutes still left to play.

“Fernando played well. He had some opportunities in the first half and I took him out just to use Didier, [who was] fresh and with power. That’s the only reason I changed him.

“His performance was better than that against Liverpool. Every striker wants to score. I don’t think he’s frustrated, because he just needs time to play with us.”

After dropping Drogba in favour of Torres last night, Ancelotti also revealed that he is considering pairing both players together for Chelsea’s Champions League second round game with FC Copenhagen next Tuesday, as the latter will be cup-tied for Saturday’s FA Cup fourth-round replay against Everton:

“Maybe in the next game we will use both [strikers], but we wanted to have more control of the pitch in this game.

“I don’t know if Didier was happy, but every player knows every game is important. We wanted to rotate to maintain his condition and to give everyone great motivation.”

On a brighter note for Chelsea, despite conceding the late penalty, new signing David Luiz looked every inch the £25 million centre-half on his full debut, at one point putting Torres through on goal with a delightful through-ball just before half-time, only to see the Spaniard make a stinky hash of his first-touch – which says it all really.

I must admit that I only saw the highlights of the game, which duly concentrated and condensed all of Torres’ bumbling efforts into a seemingly seamless 5-minute package of ineptitude.

Did anyone out there who watched the entire match garner any glimmers of hope for poor ol’ Nando?