With their relegation-threatened team languishing second-bottom of the J1 League, Cerezo Osaka were forced to sit and watch them lose 1-4 at home against Kashima Antlers yesterday to seal their relegation from the top tier of Japanese football in suitably naff fashion.

While the Osaka chairman (who had previously announced his intention to resign) was addressing the crowd after the game, the peeved fans unfurled a huge banner which displayed what might just go down as the least pithy message in the history of such things… 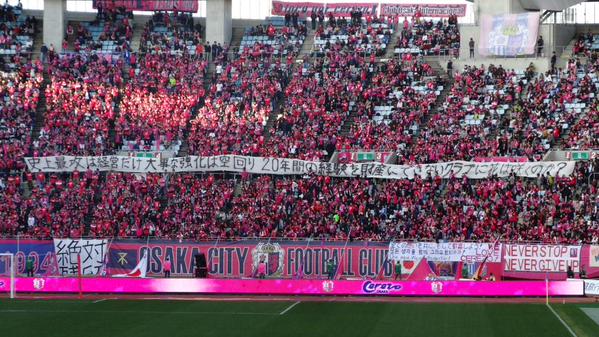 “The “Strongest Attack in History” [the club’s 2014 slogan] was only financial and our reinforcement efforts were worthless in the end. Can a club incapable of using its 20 years of experience truly blossom?”

Word to the wise: Osaka are nicknamed the Sakura (the Cherry Blossoms), so the quip at the end is not only scathing, but actually a fantastic pun too.