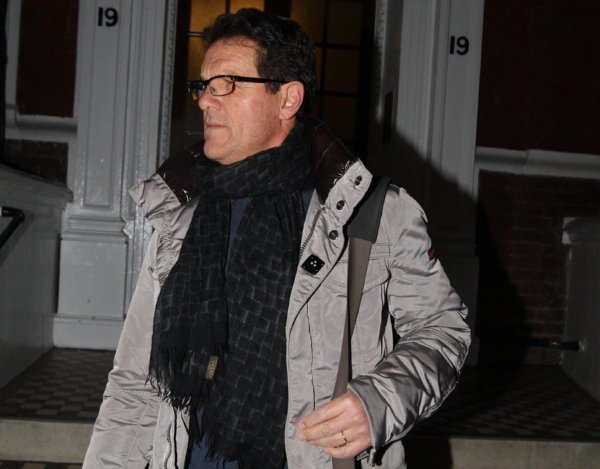 You turn your back for one second and what happens? Just three months and three friendly games before Euro 2012 gets under way in June, Fabio Capello resigned as England manager last night after spending the afternoon bickering with FA chairman David Bernstein and general secretary Alex Horne at Wembley over his comments made to the Italian media vis-a-vis the FA’s premature decision to strip John Terry of the national captaincy.

The FA released the following statement:

“The Football Association can confirm that Fabio Capello has today resigned as England manager.

“The discussions focused on the FA Board’s decision to remove the England team captaincy from John Terry, and Fabio Capello’s response through an Italian broadcast interview.

“In a meeting for over an hour, Fabio’s resignation was accepted and he will leave the post of England manager with immediate effect.”

Capello felt undermined, so did Bernstein and Horne. They employ him. He got canned. That seems to be the long and short of it.

The FA, the English press and Capello; It was a loveless tri-pronged marriage from the offing. One of the great, weeping epics of our time. Like a husband and wife (and wife), growing old and decrepit together while the relationship gradually becomes utterly sapped of requited romance – only continuing to sleep in the same bed at night as he’s handy to have around when the fuses need changing and she’s willing to do all the household paperwork. By the end, they all despised each other.

It’s over. Rightly or wrongly, it’s over. Capello leaves behind him the best winning ratio of any permanent England manager ever (66.67%, beating Sir Alf’s 61.1%), breezing through two separate qualification campaigns with ne’er a hitch while losing only two competitive matches during his 41-game, four-year tenure.

The fractious World Cup debacle is an albatross he’ll have to bear, though the contributing factors are myriad and the blame is to be shared out equally. Capello went in with a distant, disciplinarian modus operandi and the players weren’t malleable or willing enough to conform. It just didn’t work.

And so, quite naturally it would seem, our thoughts turn to Harry Redknapp – who is, unfortunately for those of us who perish the thought, the only real outstanding candidate for the post. If this morning’s Tweets are anything to go by, all the major players (Rooney, Ferdinand, etc) want Redknapp sworn in post haste as well as every single journalist in the land – though leaving an ascendant Tottenham in the lurch will undoubtedly be a wrench.

It seems Arry’s reluctance to go in for the whole ‘drafting up in-depth player dossiers and tactical gubbins bordering on telemetry’ approach is proving to be a popular prospect for a dumb squad who just couldn’t deal with Capello’s rigorous scrutiny.

Is Redknapp a better, more thorough manager and tactician than Capello? No, absolutely not. Is he more likely to see this current crop of England internationals through the Euro 2012 group stage on a wave of brevity and BANTAAAH! Quite possibly.

The whispers on the wind are that Stuart Pearce will be taking temporary charge of England for their friendly against Holland at the end of February, with a decision being made on the course of action imminent shortly after.

(UPDATE: The FA have just confirmed that Pearce will be put in temporary charge for the Holland game.)

My personal prediction? Redknapp will take charge for Euro 2012 on a temporary basis and then return to Spurs for pre-season. England will do ‘the usual’, exit with a whimper and Arry will get off scot free (again) as it was all Capello’s big, slab-faced fault for upsetting the nation’s apple cart so close to the start of the tournament. The excuse is ready-made and nigh-on irrefutable.