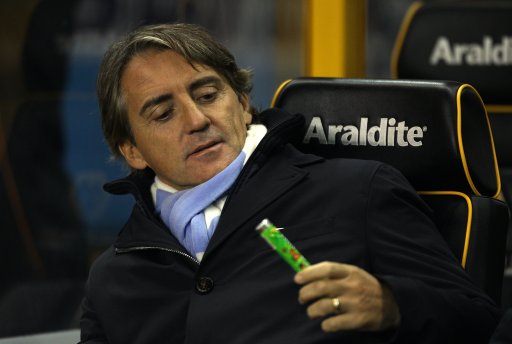 Poor old Roberto Mancini has seen his megabucks Man City side blow their chances of securing a first Premier League title in recent weeks, a capitulation which has left the Italian a less than happy bunny. However, despite all the pressure and stress, Mancini was still touched when he received an unusual gift from eight-year-old City fan, Megan Kinghorn.

Megan’s mum, Kirsty, fills us in on the details:

“We had a running joke in the house that whenever City were on the telly Mancini and his assistant Brian Kidd always seemed to be eating sweets.  During one match we spotted what looked like a packet of Fruit Pastilles.”

“Megan said she was going to buy some with her pocket money and sent them to him. We went to Asda, got a four-pack and she wrote a letter and sent it to him. She thinks he’s wonderful. Every night when she came home from school the first thing she would ask was if anything had come for her.”

And indeed, before you could say “Mario Balotelli is a mad loon”, a letter did drop through Megan’s letterbox. Mr. Mancini himself had written to her, saying ““I am glad we have great supporters like you.” Along with a signed photo of himself, the City boss also revealed that Brian Kidd had already scoffed all the sweets.

Even the most cynical fan out there will surely crack a smile at this genuinely feel-good tale. Oh, go on, you miserable bunch!

By the way, expect Balotelli to buy his boss a sweet factory or something to make up for his Emirates performance.