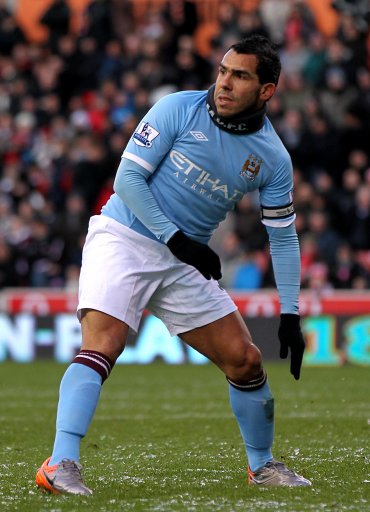 Manchester City striker Carlos Tevez is cripplingly homesick, cast adrift on an endless sea of apathy and fully intent on letting everybody know all about it.

In an interview with TyC Sports, Tevez once again reiterated his intentions to retire early, as well as voicing his growing contempt for the more ‘fiscally driven’ of his peers:

“Football is only about money, and I don’t like it. There are so many agents with really young footballers. It’s awful, as these young players are not interesting in winning titles, they only want money.

“The young players think that they have won something in football because they have two mobile phones and a house. Today, there are many bad people in the football business, and you have to fight with them all the time. I’m tired of that too.”

Moving into full Meldrew mode, Tevez then began criticizing the youth of today with their hoods, vodka and Gameboys – stopping just short of insisting that a stint of National Service would straighten those illiterate ingrates out:

“Today, the young players have no education at all, and I don’t want to listen to them. When I played in Boca, when Martin Palermo or Juan Roman Riquelme talked, I listened to them.

“So I don’t want a young player to tell me ‘why did you do that?’ in the dressing-room. I would punch him, as I have won 13 titles in my career.

“I’m going to play football for three or four years in Europe, then I will quit. I would play for Boca again only if my father asks me to do it, but I don’t want to play in Argentina again. If you ask me, I would love to have my old life back in my neighbourhood of Fuerte Apache as I don’t like my way of life today.

“I don’t want to suffer any more, I just want to be calm, I want some peace. But at the moment, football feels like a job for me.”

Life really is a grind for poor, poor old Carlitos at the moment, ain’t it? My heart weeps.