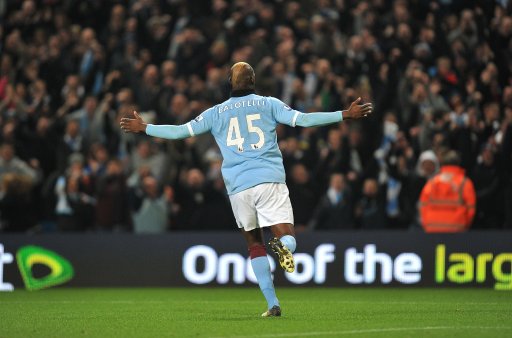 After admitting that he may need help to refocus his wayward lifestyle a couple of days ago, the last thing Mario Balotelli needed was for another tale of insubordination to rear it’s ugly head.

A tad unfortunate then, that this morning brings with it the news that Balotelli allegedly spent an evening chanting Wayne Rooney’s name at Jenny Thompson, the hooker at the centre of the Manchester United striker’s sex scandal last year, whilst dining out in the city a few weeks ago.

According to several of this morning’s tabloids, Balotelli eyeballed Thompson whilst eating at the San Carlo restaurant and launched into a rousing rendition of ‘Rooney! Rooney!’ as she made her way back from the toilets.

We’ll let the Sun take up the yarn from here:

“Balotelli then burst out laughing and flicked the finger at Jenny’s friends.

“As he left the San Carlo restaurant, the £24million Italian forward blew a raspberry at property developer Sam Birch and asked him to [step] outside.

“Balotelli, who had scored against Aston Villa before the 11pm row earlier this month, then left in his white Maserati.”

“Jenny is used to getting heckled but she didn’t hear what Balotelli said. He said ‘come with me’ and walked outside. He tried to grab my arm before squaring up.

“Our foreheads were touching and I wasn’t going to back down. Then he swore at me in Italian and the waiters ran over and took me inside.”

First of all let’s start by saying that we reckon almost none – if any – of this blatant PR-stirring garbage is true.

Are we seriously meant to believe that Balotelli (a man that couldn’t put a face to Jack Wilshere’s name not so very long ago) picked out and instantly identified ‘Juici Jenni’ (one of the many thousands of anonymous, orange famewhores that currently orbit the professional game) as one of the lead protagonists in a gutter press scandal from all the way across a crowded restaurant?

I mean, the man struggles with bibs for Christ’s sake!