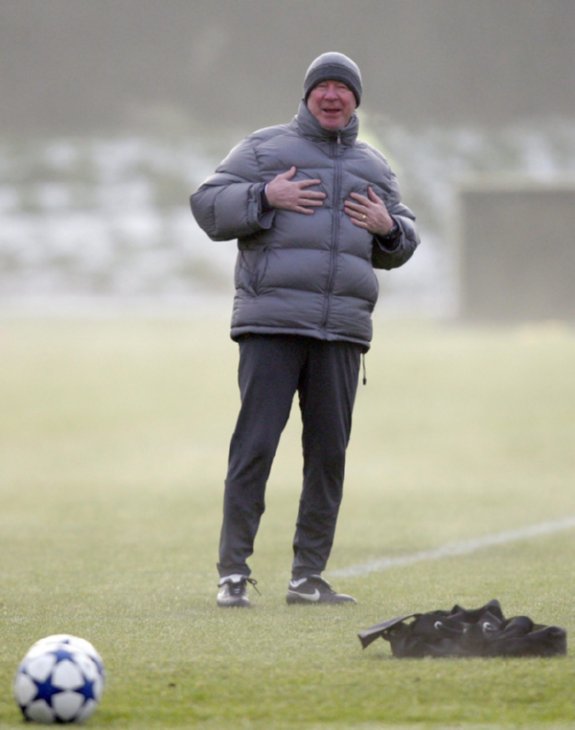 “You come at the King, you better not miss BROSEPH!!!”

Seasoned ‘snarky combat’ vet Sir Alex Ferguson has reliably informed anyone that will listen that he is primed and ready for Manchester City’s war o’ words as the Premier League title race reaches the smelly end, after City mouthpiece Patrick Vieira insisted Ferguson’s decision to bring Paul Scholes out of retirement showed weakness on his part – an ‘act of desperation’ if you will.

Vieira’s timing was a little unfortunate seeing as, the following evening, Carlos Tevez managed to weasel his way back onto the City bench, despite being told he’d never play for the club again roughly five months ago. Hey ho. Why let little hypocritical discrepancies like that get in the way of a good ding-dong?

“If it’s desperation bringing back the best midfielder in Britain for the last 20 years then I think we can accept that. I think [Vieira] was programmed (to say) that.

“Roberto had a dig a couple of weeks back. We’re all going to play our hand that way. There will be plenty of ammunition for (mind games).

“If you talk about desperation, they played a player the other night who the manager said he’d never play again and he takes a five-month holiday in Argentina.

“What is that? Could that come under the description of desperation?”

Elsewhere, Rio Ferdinand has been stirring the scheiße, whispering in the Beeb’s ear that he’s suddenly started seeing a lot more blue shirts around Manchester after City began to swell:

“Walking around in town, you see more and more blue shirts than you probably ever would have seen over the last 10 years.

“Success sometimes brings people out of the woodwork. So fingers crossed we can delay that and make sure that we get this title sewn up this season.”

Call me old-fashioned, but it’s this the way the Manchester rivalry is supposed to be? Sniping back and forth? Superfluous point scoring? By my reckoning, it’s been a little bit too polite for a while now.

Time to lock Fergie and Bob Mancini in Portakabin and hand out the foam baseball bats.