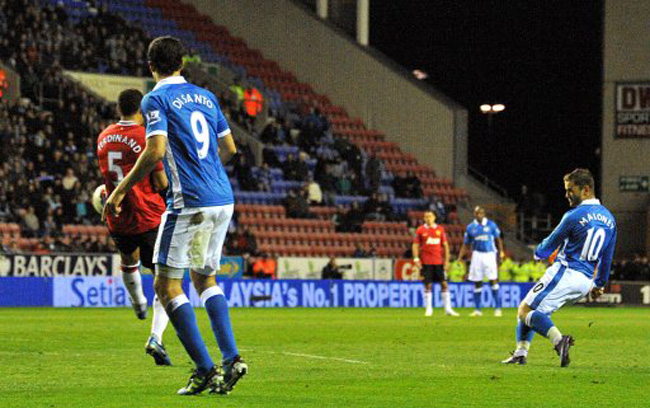 Well, well, well! Have Wigan just re-opened the title race courtesy of a shock 1-0 win against Man Utd? With City hammering West Brom tonight, the gap at the top is now down to just five points with five games left to play.

Shaun Maloney was the goal-hero for Wigan in the first-half, as United, without Paul Scholes, struggled to impose themselves on the game.

Ironically, after all the hoo-ha over United’s apparent luck with refereeing decisions in recent weeks, Fergie’s men were unlucky not to get a penalty in the second-half after a blatant handball in the box from Maynor Figueroa. While, that Maloney goal also came from a corner which shouldn’t have been awarded at all.

However, overall, without Scholes dictating the play in the middle of the park, United are a different, and inferior, side.

Roberto Martinez and co, on the other hand, will be delighted with the vital win which sees them go two points clear of the drop-zone.