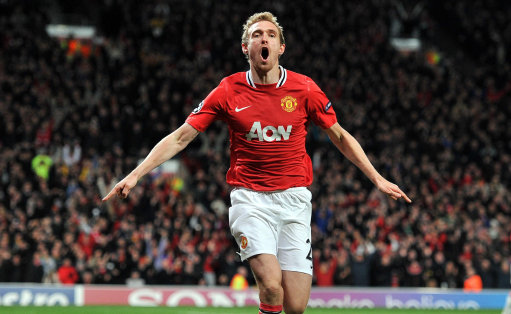 Only recently, more question marks were raised over Darren Fletcher’s playing career by none other than his Manchester United boss, Sir Alex Ferguson. However, Scotland boss Craig Levein has now announced that the 28-year-old United star will link up the national side ahead of their friendly against Australia on August 15th.

Fletcher has been out of action since last November, courtesy of a chronic bowel problem which had been feared would put an end to his playing career. However, Levein said:

“Darren will be with us at the weekend. He is back in training and he played 45 minutes in a practice match last week.”

“He is not in the squad because he has not played for Manchester United but he will come back and do a bit of training with us.”

While it is only the first small step on the road to recovery for Fletcher, it must be seen as a good sign. Never one of United’s most technically gifted players, the big Scot still played an important, hard-working role in the middle of midfield, something the Red Devils could do with in the coming season as they attempt to wrestle the Premier League title off their noisy neighbours. Good luck Fletch!