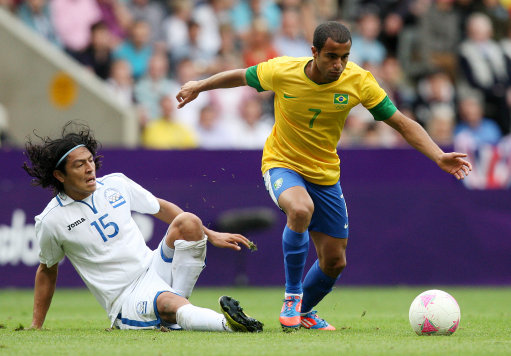 19-year-old Brazilian attacker Lucas Moura was within touching distance of becoming a Man Utd player when nouveau riche PSG jumped in to gazump the Old Trafford giants courtesy of a whopping €45m bid for the player.

According to Moura’s agent, Wagner Ribeiro, a deal had already been agreed for the Sao Paulo youngster to join the Red Devils. He said:

“Everything was agreed between Sao Paulo and Manchester United. The contract had been written and just needed to be signed. But then Leonardo called me and asked to talk to Lucas.  They talked. Leonardo was helped by the fact he is Brazilian. He was very gentle with Lucas.”

“The possibility of living in Paris – a much more pleasant city than Manchester – also influenced his decision. But it was PSG’s project that impressed Lucas.”

The last-gasp move came as a bit of a shock to Fergie, who said:

Anyway, with Lucas Moura joining the Galacticos of PSG, Fergie is still pushing for Robin Van Persie, with the Gunners apparently wanting £25million for the Dutch striker. But with Rooney, Javier Hernandez and Danny Welbeck, do United really need another striker?