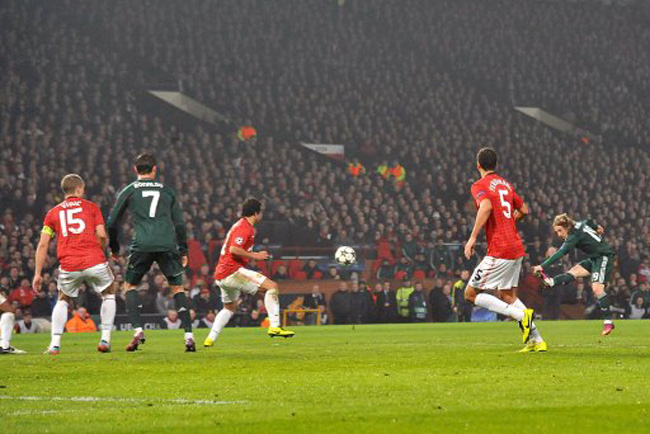 Referee Cuneyt Cakır, the man who sent off John Terry in last season’s Champions League semi-final, was the villain of the piece (from the home side point of view) at Old Trafford on Tuesday night. The official’s controversial decision to send Nani off for dangerous play on 56 minutes was a major turning point in a dramatic night in Manchester.

Prior to the sending off, the Red Devils had impressed, with Danny Welbeck superb and Wayne Rooney surprisingly relegated to a place on the subs’ bench from the start. The home side’s pressure eventually told when Sergio Ramos put through his own net just after the break but Nani’s sending off would totally change the dynamic of the game.

Jumping in with his foot very high, Nani caught former Liverpool defender Alvaro Arbeloa in the midriff (ish) , although it looked worthy of nothing more than a yellow. However, ref Cakir’s decision to send off the Portuguese winger had Fergie and most of Old Trafford fuming.

The home side did their best to turn their frustration into positive energy, but the introduction of Luka Modric gave Los Merengues an added dimension, with the former Tottenham man eventually scoring courtesy of a magnificent curling effort.

Cristiano Ronaldo, a tad quiet by his standards up until then, then made it 2-1 on the night when he slid the ball home from a Gonzalo Higuain centre and that was that really.

United kept battling and were unlucky not to get a goal back but ultimately, a man down against Madrid proved a bridge too far for the Premier League leaders.

Interestingly, in the post-match analysis on ITV, none other than Roy Keane backed the ref’s decision to send off Nani. That’s sure to put the Corkonian cat amongst the Mancunian pigeons!