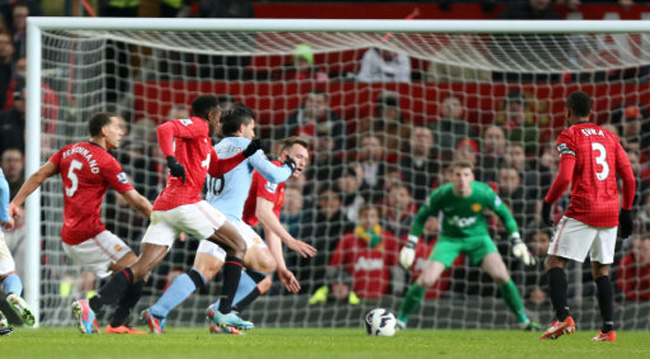 Sergio Aguero, like his team-mates, hasn’t quite hit last season’s heights this time around, but in netting a superb late winner for the Citizens at Old Trafford, the Argentine hitman will at least have restored some pride for the blue half of Manchester.

In what was an action-packed and often heated clash, it took until the 51st minute for the deadlock to be broken, when James Milner fired home after Ryan Giggs had initially given the ball away. However, it took just eight minutes for the league leaders to draw level, courtesy of a Vincent Kompany own-goal after a Phil Jones header bounced in off the Belgian defender.

With 20 minutes to go, Roberto Mancini sent on the fit-again Aguero and the striker duly delivered, powering into the box past a number of United defenders before brilliantly firing past David De Gea.

The result shortens the gap between the two clubs to 12 points at the top of the table but while the title is surely beyond City, this win will give them timely boost in what has been a disappointing campaign.