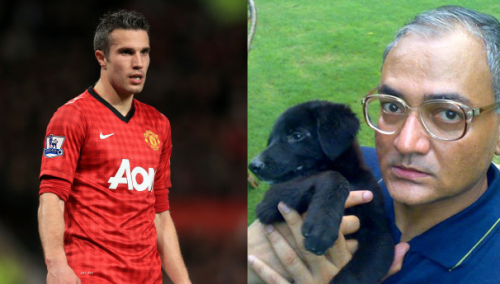 An unfortunate set of initials has seen an IT consultant from India bombarded with Tweets intended for Manchester United striker Robin van Persie, known to his friends as “RVP”.

52-year-old Ravi Visvesvaraya Sharada Prasad signed up for Twitter under the account handle “@rvp” and is now complaining that the case of mistaken identity is becoming a real “nuisance” after hundreds of over-eager United fans Tweeted him to congratulate him on his Premier League title success.

A selection of the messages Prasad received on Monday night…

“@rvp You really made the difference for us this season, well done”

“Great scenes as @RVP celebrates winning his first title at United… Well done mate” and “@rvp hey Robin, that was a fantastic hat trick…can you send me a shirt please?”

After Prasad sent out a Tweet telling the world that his wasn’t the official account of Van Persie, some pithy United fans began leveling the #banter his way…

“Congratulations to @RVP you fully deserved it. Incredible since you are a part time footballer & info tech consultant. #CHAMPIONS2013.”

Prasad told the BBC that he spent over 10 hours on Tuesday morning blocking the 5,000 new followers he gained overnight, and that he just wants things to return to the way they were before:

“I’m a fan of Robin van Persie, so I understand people wanting to congratulate him, and most of the messages or mentions are nice.

“But it’s a real nuisance for me. I keep having to tell everyone I’m not Robin van Persie and blocking unwanted followers.

“I sent lots of people messages explaining who I was. My email account is clogged too – I think people have been trying to hack into my Twitter account as I keep getting messages referring to a forgotten password.”

Just chuck that extra ‘S’ in there and you’ll be fine Ravi, until you start getting an avalanche of dyslexic people replying to wedding invitations.