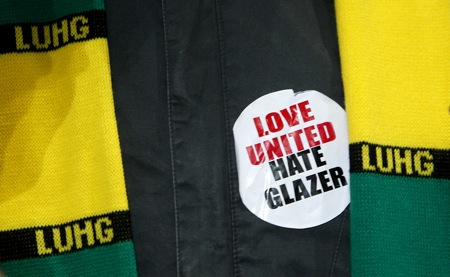 Make no mistake; this revolution is being televised.

When 10,000 Manchester United fans marched on Old Trafford in summer 2005, most knew then what we know now. The soon-to-be implemented leveraged buyout of United by the American Glazer family would load the club’s books with millions in debt.

Anger was the dominant feeling. After all, the club’s own managing director David Gill prophesised that debt was not only an inappropriate business model for the club but, dramatically, the “road to ruin”.

In the aftermath of takeover, thousands walked away from the club. At least 30,000 gave up their season tickets in protest and many others never returned, forming the ‘Red Rebels’ FC United of Manchester.

Gill had fought off the Glazers’ advances for months – in public at least – as the game of offer and counter-offer between the Americans and United’s Irish investors Cubic Expression played itself out to inevitable conclusion.

Five years on, poacher has turned gamekeeper, with Gill – £1.8 million per year better off – the primary exponent of the leveraged business model that threatens not only United’s hegemony over the English game but the very existence of the club in its current model.

Gill, as the pre-eminent media face of the club’s upper management, has done most to deride supporters’ concerns over the club’s £716 million debt. It’s a debt that will suck at least £565 million from United between now and 2017.

The managing director would be foolish to underestimate the strength of feeling among United supporters this time around.

Five years ago, management’s gamble that supporters’ vocal protest would fade into apathy paid off. Angry as supporters were back then, the brilliance of Sir Alex Ferguson in building yet another great United side tempered the fire in fans’ bellies. It’s hard to proselytise doom when glory is raining down.

Without spending a penny of their own money on the team, the Glazer family successfully bought swathes of United supporters’ financial loyalty.
In 2005 Gill had praised the voice of Shareholders United, an organisation that has since morphed into the Manchester United Supporters’ Trust (MUST) -the group leading the current round of Old Trafford protests.

If SU had been dammed with faint praise then, it’s not a tactic management is feeling confident enough to repeat now. United fans are angry, militant but most of all, organised. 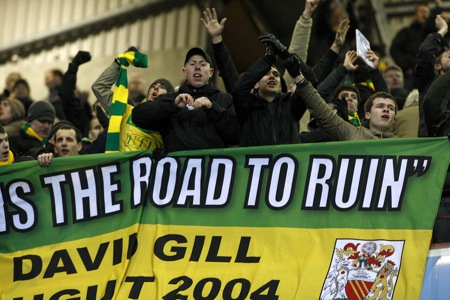 The brilliantly subtle green-and-gold revolution is rapidly gaining momentum, with more than 30,000 scarves on display last weekend at Old Trafford. Coloured as Newton Heath were back in 1878 when the club was formed as a united railways workers’ team, green and gold is a reminder to the Glazer family of the history United supporters are fighting for.

The simplicity of the hook, together with the five-year-old ‘Love United, Hate Glazer’ (LUHG) moniker has inspired a new generation of protest that is unlikely to be quelled so easily, educated as fans now are to the financial mismanagement of the club.

Anecdotal tales of roughhouse tactics by club employees has only made the protest stronger: supporters ejected from the stadium by overzealous officialdom, fans donning the colours of revolution bared from executive areas and even a veteran steward sacked for returning a confiscated anti-Glazer banner.
The club has tried and failed to cut the protest off at the knees – going so far as to misinform United supporters that banners “not in club colours” are banned from the San Siro for next week’s Champions League clash with AC Milan. They are not.

But green and gold is merely phase one of a revolution that will have serious economic consequences for the owners and quite possibly the club too.
Ownership of United is not a plebiscite. Few in the Glazers’ Tampa base seek the warmth of fans’ love. They do, however, seek cold, hard cash. For every pound supporters spend between now and 2017, the Glazers will suck out 79 per cent in debt interest, dividends and ‘management’ fees.

For the Glazer family, home is where the wallet is. Fans are acutely aware of this fact.

For more news and opinion on Manchester United, check out the excellent United Rant