By gum, it’s all going swimmingly at Manchester United at the moment, isn’t it?

In the wake of Tuesday evening’s insipid 0-0 draw against Valencia in the Champions League, defender Luis Antonio Valencia has today attempted to explain his actions after ‘liking’ an Instagram post which called for Jose Mourinho to be sacked.

The post, shared by a ‘Team Valencia’ fan account (yes, such a thing does exist), featured a caption griping about United’s flat performance, the predictable result and a plaintive plea for Mourinho to lose his job over it.

Sure enough, it was soon ‘approved’ by Valencia himself… 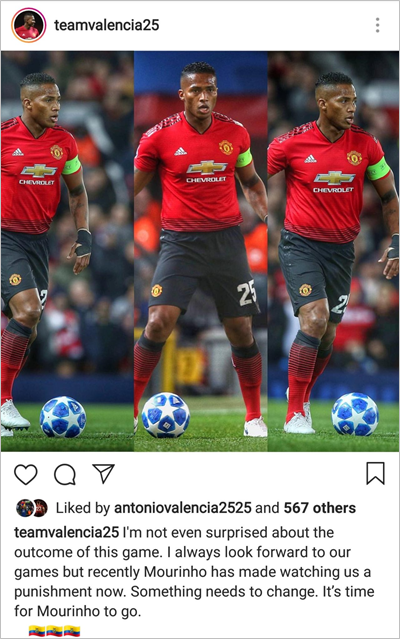 Of course, it wasn’t long before Valencia’s pointed ‘like’ caught the attention of fans, which has ultimately led to the Ecuadorian right-back issuing a mea culpa in the cold, harsh light of Wednesday morning.

Attempting to absolve himself, Valencia wrote on Twitter that he simply liked the Instagram post – essentially just three photos of himself – without reading the underlying text…

Yesterday, I liked a post on Instagram without reading the text that accompanied the picture. These are not my views and I apologise for this. I am fully supportive of the manager and my teammates. We are all giving our everything to improve the results. pic.twitter.com/bMEsrAwMkh

Interestingly, Valencia wasn’t the only United player dropping clangers on social media after the match at Old Trafford, with Paul Pogba also attempting a defiant statement of intent but missing out a crucial comma in the process…

Just how long does he intend to go on fighting United for? We only ask because it’s all getting a bit tedious now.