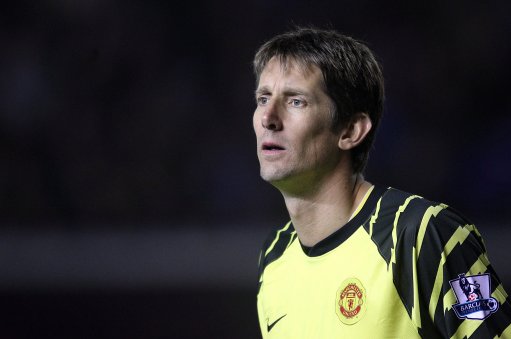 After months of to-ing and fro-ing over a decision, Manchester United’s veteran custodian Edwin van der Sar has finally confirmed that he is to ‘hang up his gloves’ at the end of the current season.

Van der Sar had been toying with the prospect of calling time on his illustrious footballing career when his wife, Annemarie, became seriously ill in late 2009.

Speaking via his management company’s website, the Dutchman relayed the news:

“It is now time to pay attention to my family.

“I cannot really identify a time when [the decision to retire] happened, let’s just say that it was playing on my mind from the moment Annemarie had her stroke.

“She has fought back from it. We decided on another year in England and thus to stay at Manchester United.

“But, once engaged in the season, the thought of saying goodbye started to gnaw a bit more emphatically, though my age played no role – I am 40-years-old, but I still feel fit.

“The decision came suddenly. Do not ask me how or why, but suddenly you know. That was sufficient.

“The time has come to devote greater attention to my family – although they have never complained. Everyone in the family has indeed always had to focus on me, but we have also had a lot in return.”

Classy man, is our Edwin – and a damn fine goalkeeper as it happens.