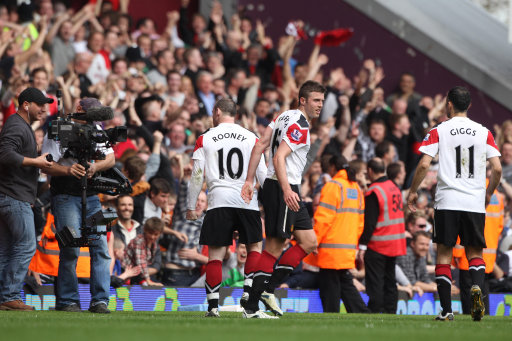 The FA have announced this morning that they have stuck to their guns and decided to uphold their ‘obscene language’ charge against Wayne Rooney despite his appeal, meaning that the Manchester United striker will have to serve a two-match ban (thus missing the FA Cup semi-final derby with Man City) after all.

It is thought that Rooney accepted the charge but appealed against the ban, citing provocation from the West Ham fans behind the goal and the actions of the cameraman – who United’s legal representatives claimed was ‘looking for his money shot’ by encroaching onto the pitch – as a defense for dropping the F-Bomb on television at Upton Park on Saturday.

Rooney has since issued the following statement:

“I am gutted to miss two matches, one of which is an FA Cup semi-final at Wembley. I am not the first player to have sworn on TV and I won’t be the last.

“Unlike others who have been caught swearing on camera, I apologised immediately. And yet I am the only person banned for swearing. That doesn’t seem right.

“Whatever, I have to accept that what’s happened has happened and move on from here. That is what I intend to do.”

Perhaps Rooney should have just blind-side elbowed the cameraman in the temple as he ran past him to celebrate – that doesn’t seem to carry much of a charge these days.