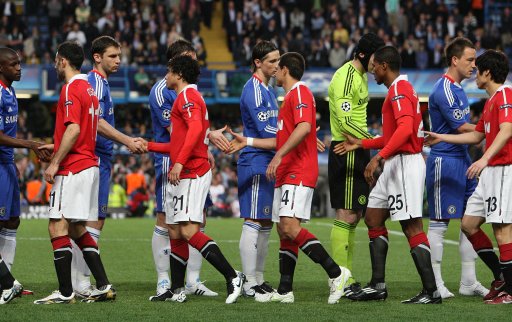 Thanks chiefly to Ryan Giggs’ stately first touch, Manchester United will go into their Champions League quarter-final second-leg tie with Chelsea at Old Trafford tonight a solitary away goal to the good.

While United are steadily rumbling their way toward a prospective domestic and European treble, Chelsea are effectively scrapping on one last front in the hope of salvaging anything from their muted season – with continental glory their last chance to validate Roman Abramovich’s January cash influx and, if several month’s worth of tittle-tattle is to be believed, Carlo Ancelotti’s position at the helm.

Abramovic has seen Chelsea fall at the semi-final stage of the Champions League on four separate occasions since he took over (let alone the penalty shoot-out debacle against United in the 2008 final) and duly pumped £75-odd million into the squad at the turn of the year with the express intention of staving off the fifth premature ejaculation of his tenure – which, you may of have thought, have ramped up the pressure to deliver on Ancelotti’s part.

“No, there is no jeopardy. My future is already decided, I don’t have a problem about [the United] game. It’s not important to speak with Roman. When I have a contract, everything is okay with him.

“A lot of times, I’ve said that pressure, for me, is [not a bad thing]. Pressure keeps me focused and concentrated, and gives my players the possibility to do their best. I’m focused on this.

“I know it will be difficult [tonight], but we have a lot of possibilities to play a fantastic game. To be involved in this game is fantastic for my job, for my career – so I’m not afraid, I’m not worried about this.”

Optimism aside, the omens aren’t looking overly promising for Chelsea, as while United have the lowest goal tally (10 in nine games) of the eight sides remaining, they have also only conceded two goals on their run to the quarters and picked up seven clean sheets in the process – with an eighth of the campaign more than enough to see them progress tonight.

And there’s more; Sir Alex’s side are also unbeaten in Champions League football against all English opposition, with a record of three wins and a draw against Premier League opposition.