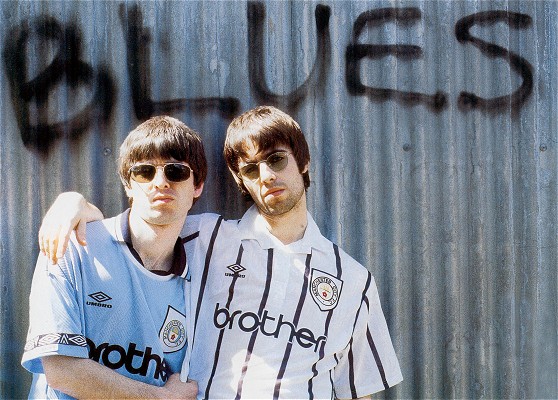 In an on-off feud that dates back a few years to when former Oasis lynchpin Noel Gallagher signed a guitar for Gary Neville with the pithy: “Happy Birthday Knobhead MCFC x”, the former has now threatened to pull the latter’s wispy moustache out with his teeth after the recently-retired Manchester United right-back made the mistake of quoting Oasis lyrics on his Twitter feed.

After United effectively tied up their 19th league title by defeating Chelsea on Sunday, Neville tweeted: “’While we’re living, the dreams we have as children fade away.’ Not if you support United!” – the first line of which is a lyric from ‘Fade Away’, which I believe was the B-side to ‘Cigarettes and Alcohol’.

“I feel violated. If Mr. Neville continues to use the holy scriptures of Oasis to communicate with the Cockney massive, I shall be forced to come up to Cheshire in the middle of the night, break into his house, tie him to a chair, make him listen to the Best of Simply d(Red)ful while I pull his tash out one grey hair at a time (with my teeth), liberate those Oasis CDs and shit in his manbag. YOU HAVE BEEN WARNED…”

Moustache yanking? Manbag defecating? All well and good if you ask me, but no man – no matter how vile, rodent-like and detestable – should be made to suffer at the hands of Mick Hucknall ever again.

A line has been crossed.