If ever there was an incident which perfectly summed up end-to-end football, it’s this rather amusing incident from a clash in Portugal between the B teams of Sporting Lisbon and Sporting Braga.

During the game, Lisbon’s B side thought they had scored a goal, courtesy of a Pedro Delgado header from a free-kick. However, with the players celebrating the goal, the referee eventually ruled out the goal for offside. 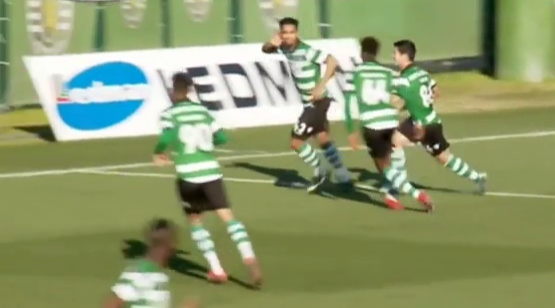 The quick-thinking Braga restarted the game and poured forward with the Lisbon players slow to realise what was happening. The three Lisbon defenders couldn’t deal with the five onrushing Braga attackers, with midfielder Xadas firing home a fine curling effort from the edge of the box…

Not surprisingly, the Lisbon players were less than happy with the whole situation, particularly as no flag seemed to go up for the initial goal.

Buoyed by their counter-attacking opener, Braga would go on to the win the game 2-1.