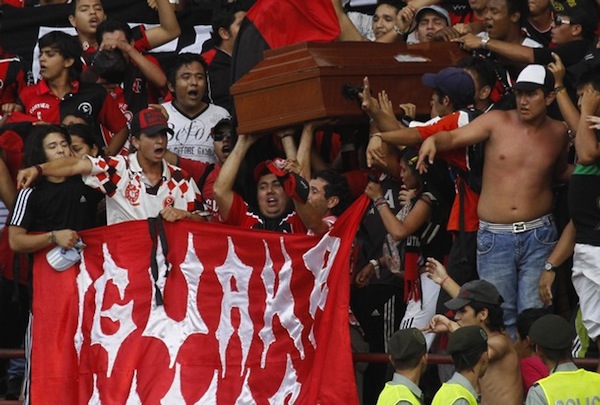 Photo via the AFP.

A street gang tied to Colombian top-flight outfit Cucuta Deportivo smuggled a dead member into a recent match in a coffin – yep, you heard that right – dead member…into the game…in a coffin!

17-year-old Cristopher Jacome was shot dead by hitmen whilst playing football in a park on the southern outskirts of Cucuta on Sunday evening but, thanks to his fellow gang members, still managed to make it to the match later in the day at the General Santander Stadium.

Colombia Reports takes up the story:

“After Jacome’s wake, friends from the ‘Barra del Indio’ [gang] took the cadaver from the funeral home and paraded it around and then into the stadium in an attempt to pay homage to the slain soccer fan.

“Colonel Alvaro Pico, a local police official, said that the boy’s death had nothing to do with his love for the soccer team rather it was a consequence of criminal actions in the area where he lived.”

“They don’t usually let the ‘barras’ (fanatics/ultras) in but, yes, a cadaver made it into the stadium. This is the only part of the world where this has happened.”

Hard to argue with that.