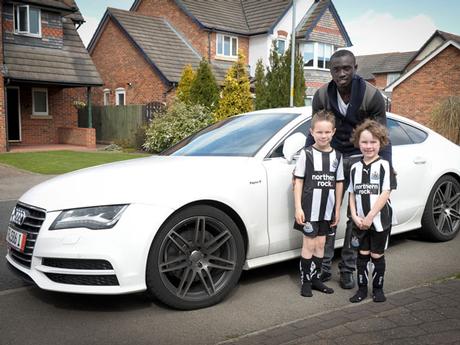 The story goes that, back in early February, four-year old Sam Livingstone made Newcastle newbie Papiss Cisse a ‘Welcome to Newcastle’ card at school (while he should have been making his Mum a Valentine’s Day card) and sent it to the Senegalese striker.

Cisse received the card at Newcastle’s training ground shortly thereafter and was so taken with the gesture that he sought to arrange a surprise trip to visit Sam and his older brother Jack last Saturday morning (the latter of whom was celebrating his seventh birthday on that very day) with the boys’ father.

Cometh the day, cometh the man. There was a knock on the door of the house in Bedlington and the rest, as they say, is heart-warming.

“I couldn’t believe my eyes when Dad told me and my brother Jack to go and see who was at the door. Papiss Cisse was standing there, that was amazing. That just doesn’t happen.

“He came inside, brought us some really great gifts and then showed us his car which was amazing. It was brilliant!”

“The welcome I have received in Newcastle has been incredible and I thank everyone who has helped me settle in. Going to see Sam and his family was just my way of saying a special thank you to a young fan who showed genuine kindness in welcoming me to a new country and new club.

“I must thank Sam and Jack also for the Easter bunny they gave me, it was very nice.”

Awesomeness to the power of awesome.