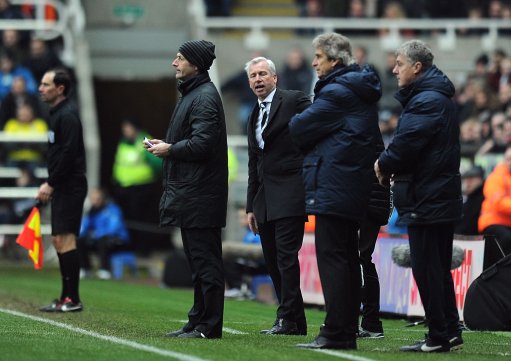 Newcastle manager Alan Pardew has promised that he intends to discipline himself after somehow managing to wriggle out of any FA punishment for calling Man City counterpart Manuel Pellegrini a “f**king old c**t” on the touchline after seeing Cheick Tiote’s thunderhumper disallowed when the two sides met at St James’ Park last weekend.

Pardew openly apologised for his conduct after the game (but only after being tipped-off about the incriminating footage, we might add!) and the FA only saw fit to issue him with a warning, but the Toon boss believes he has not paid sufficient penance and has therefore announced that he is to perform several hours of community service in an attempt to restore his karmic balance.

“There are a couple of things I would like to do outside my work hours in the local community. I have heard from [assistant manager] John Carver there are a couple of boys’ clubs struggling and I am going to do something with a housing association in Walker (a suburb of Newcastle upon Tyne).

“That will be my penance to my two girls who are a little bit miffed about my behaviour. I am not proud of the comment I made. I am going to punish myself.”

Mother, get the birch rods out!