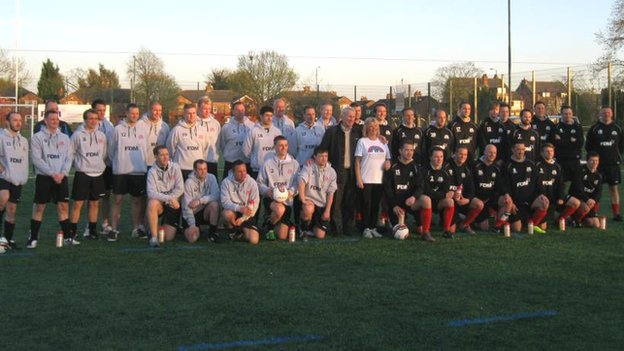 After several hours of national anthems, the players finally get round to lining up for the team photos

Many congratulations to Stockport Albion and Manchester Rovers, i.e, the 36 guys you see afore ye, who have finally muddled their way through a 72-hour-long football match over the Bank Holiday weekend in order to raise a whole shedload of cash for charity.

Smashey & Nicey would be proud.

Each player was on the pitch for five hours at a time and organisers set up tents next to the pitch for the roll-on, roll-off subs to rest up and/or get some sleep before heading back out for another mammoth stint.

Albion and Rovers slugged it out for three straight days at Stretford High School in Manchester and have now raised over £25,000 for Francis House, a local children’s hospice, with the total still rising as donations continue to roll in.

Though they know they’ve beaten the previous record for the world’s longest football match (beating the record set by a 62-hour game played in Holland last year), the guys are still waiting to hear back from the adjudicators at Guinness World Records to officially confirm it.

Hopefully, it’s only a matter of time.