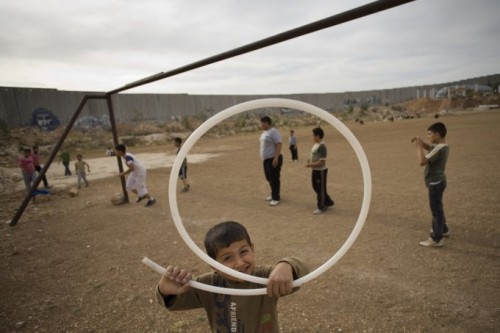 A Palestinian child gestures to the photographer while other children play soccer next to Israel’s separation barrier, background, in the West Bank town of Abu Dis, on the outskirts of Jerusalem, Tuesday, May 24, 2011. In Tuesday’s speech to the U.S. Congress, Netanyahu said Israel wants to keep key parts of the territories it captured in the 1967 Mideast war, including all of east Jerusalem and parts of the West Bank. (AP Photo/Bernat Armangue)