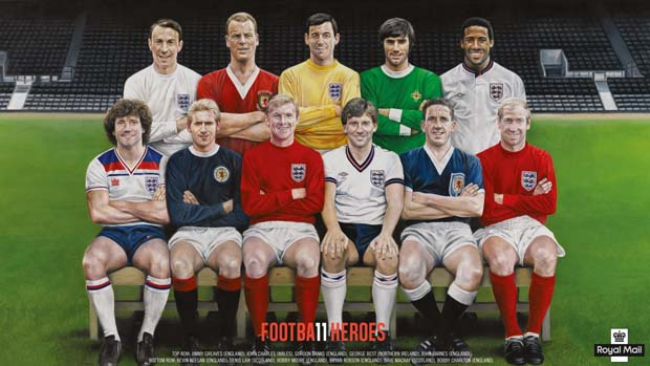 The Royal Mail are marking the Football Association’s 150th anniversary by issuing a special set of commemorative stamps featuring 11 of the British game’s most revered players as illustrated by artist Andrew Kinsman.

“Everyone who loves football has their favourite players from the past. It might have been one of the greats they tried to emulate in the school playground or a superstar they would idolise while watching on from the terraces as a fan.

“It is fantastic – especially in the year of The FA’s 150th anniversary and the Scottish Football Association’s 140th – that Royal Mail has honoured a whole team of these heroes from across the UK.”

The ‘Football Heroes’ stamps are to be released on 9th May, two days before this year’s FA Cup Final at Wembley Stadium – though, if you like, you can pre-order a set here.