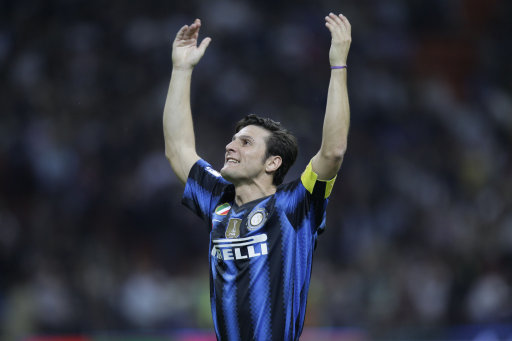 Things are getting so bad for out-of-form Italian giants Internazionale that they have taken to sending their star players on individual PR missions to try to give their disgruntled fans a boost.

The great Javier Zanetti was called into some off-the-field action after nine-year-old fan Filippo (we don’t get a second name) was pictured at the San Siro (during Inter’s game with Bologna on Friday) holding up a banner which said “Could you win, please? Otherwise they make fun of me at school! Thank you, Filippo.” 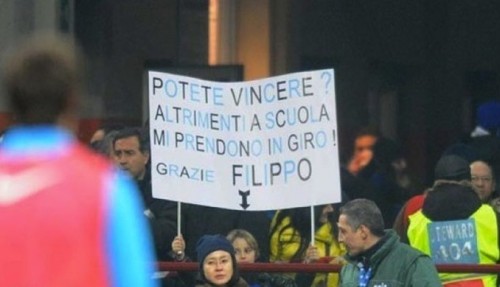 However, the Nerazzurri went on to lose that game 3-0, to make it six games without a win. Club President Massimo Moratti was quick to make the most of the young lad’s plight, personally calling Filippo’s family. Moratti then organised for captain Zanetti to present the young whippersnapper with his own Inter shirt. Not surprisingly, the boy was rather thrilled. He said:

“I won’t change team, as I remain an Inter fan. When we won the treble, I was the one who wound up my friends. Now I can walk around with my head held high.”

However, with Inter doing so badly in Serie A this season, the only thing Moratti will be sending ’round to manager Claudio Ranieri’s house is a P45.