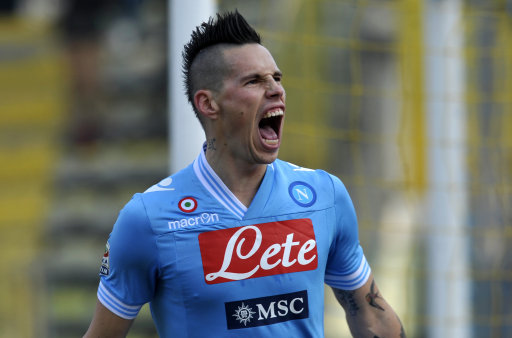 I know you. You’re the guy from the Aphex Twin video aren’t you?

It takes a big old set of hairy swingers to rob a guy who looks like Marek Hamsik, and yet here we are. The Napoli midfielder was held up at gunpoint as he left the Stadio San Paolo following his side’s 0-0 draw against Sampdoria on Sunday afternoon.

Napoli’s official radio station reported that Hamsik was on his way to the airport after the game when two individuals stopped his car, smashed one of the windows, waved a gun around in Hamsik’s general direction and stole the Slovakian’s watch, diamond earring and a small-ish amount of money and other valuables.

Hamsik isn’t the first Napoli player to be robbed, with Valon Behrami, Edinson Cavani, Salvatore Aronica and Ezequiel Lavezzi also being shaken down in and around the city – Lavezzi’s wife being so terrified by the ordeal that she begged her husband to leave Italy and join PSG if stories are to be believed.

Hell, it’s not even the first time Hamsik has been robbed in Naples. A year or so ago, he had his flat broken into and robbed – though several items were returned after a ‘local businessman’ put out the request that the 25-year-old’s belongings were returned to him.

How nice of that ‘local businessman’. Such wonderful community spirit.