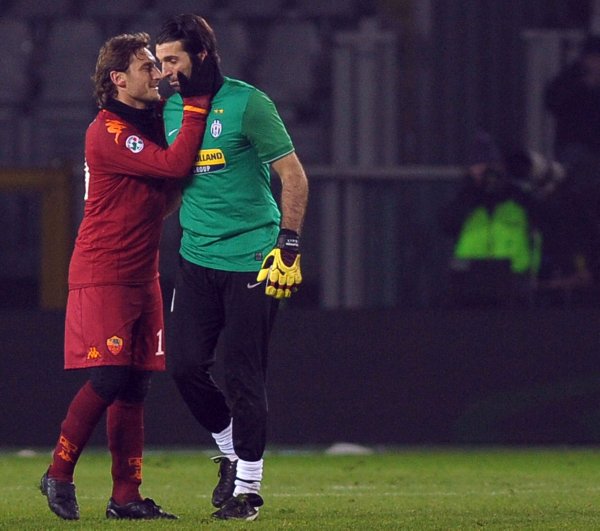 Roma icon Francesco Totti is currently in the process of celebrating his 20th year in Serie A after making his Giallorosso debut way back in the primordial ooze of 1993 after coming on as a substitute against Brescia.

Since then, one-club stalwart Totti has made a record 641 appearances for Roma, scoring a record 270 goals and also winning the World Cup with the Azzurri in 2006.

Several Italian footballing dignitaries have paid their respects to Totti over the past few days, though none were more heartfelt than the open tribute long-time friend Gigi Buffon sent to news agency ANSA:

“Dear Francesco, you have made Italian football history. Twenty years in Serie A, what an achievement… I still have the image of your first goal in my mind, it was a Roma-Foggia tie.

“We’re friends, you know how much I care about you. We started together with the U15 side, we had some splendid years together in the national team and we continue to meet as opponents in Serie A.

“You often score against me (10 times to be precise, that’s how many goals you have netted) like a champion who has forgotten our friendship…

“Then, at the final whistle, there are smiles between us again, like when I saved a penalty that I feared you would chip – it saddened me that was you.

“We are from a fortunate generation. It’s true that every season after the age of 30 is worth seven, but you seem to go back in time instead of ageing.

“You’ve written the history of Italian football, with the present and the future – you are a player who can not be doubted.

“And, for me, you’ll always be an Azzurro. An embrace from your friend, Gigi.”

Awwww, how sweet. Heroes, the pair of ’em.