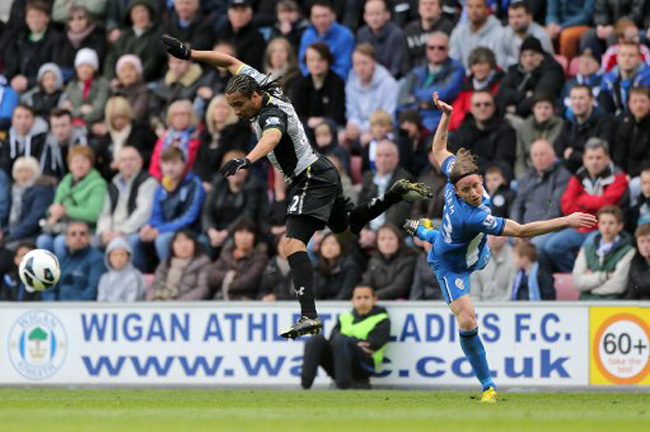 Wigan and Spurs may have their eyes on different ends of the table, but the 2-2 draw played out at the DW Stadium on Saturday did little to move either side closer to their respective targets.

Gareth Bale had opened the scoring after just nine minutes when goalkeeper Joel Robles dillied and indeed dallied on the ball before hitting it against the Welshman, with the resultant ricochet flying into the back of his own net. However, soon after, Wigan defender Emerson Boyce to head home an equaliser just two minutes later.

The Latics battled hard to close down the Lilywhites and early in the second half, Roberto Martinez’s side took the lead courtesy of a spectacular strike from Callum McManaman. Indeed, they could have gone even further ahead through Arouna Koné, only for the strike fail to convert when through on goal.

McManaman’s strike still looked to have secured a precious victory for the Latics in their battle to avoid the drop, but with just minutes left to play, goal-hero Boyce put through his own net to break Wigan hearts and give both sides a share of the spoils.

The Lilywhites are now a point behind third-placed Arsenal and level on points with fourth-place Chelsea, who have played a game less. Wigan, on the other hand, remain in the bottom three, two points from safety.