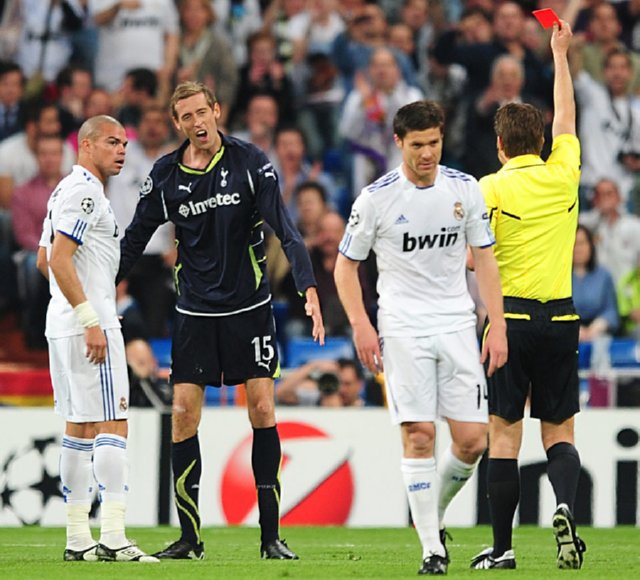 Let’s not beat around the bush here people, Tottenham were completely spanked by Real Madrid at the Bernabeu last night – and probably still would have been even if Peter Crouch hadn’t been such an over-eager toolbag from the off.

Judging from the media reaction this morning, the general consensus seems to be that Tottenham were unlucky; Crouch’s untimely red, Lennon’s late withdrawal due to a sore-throat, Jamie Redknapp’s anguished punditry – but the simple fact that Spurs were pegged back in their own half for large swathes of the tie, were lucky to escape a first-half penalty claim unscathed, endured several bouts of poor marking, went to ground too easily on far too many occasions when trying to alleviate pressure and posted a fairly dire pass completion rate suggests otherwise.

There can be no two ways about it, Spurs were singularly outplayed all evening long by vastly superior opponents – yet ‘Arry’s rabble will no doubt find a shred of consolation in the fact that they still conspired to get four attempts on goal away despite Madrid’s prolonged domination (Ronaldo alone had 14 shots), which is roughly four more than their North East London rivals managed on Spanish soil not so very long ago.

That, for me, effectively signals the end of Tottenham’s fairytale run in the competition this campaign though positives can undoubtedly be taken, with the preceding games showing that several members of the Spurs squad (Bale, Lennon, Modric, etc…) are fit for purpose as far as top level European football is concerned.

Jose Mourinho refused to bask after the game, saying that ‘with the English attitude to football, the tie is not over yet’, with Redknapp also vowing to ‘give it a go’ in the second-leg – but can anyone out there honestly envisage Spurs overturning a four-goal deficit back at the Lane?