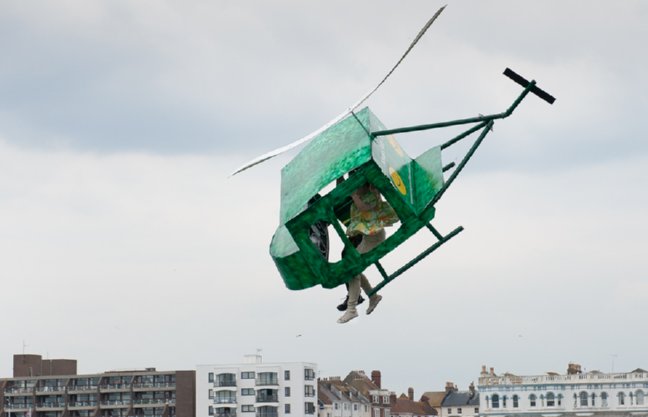 The Sky Sports News ‘Babelcopter’ takes to the skies once again!

What with it being Transfer Deadline Day and all, we diligent folks at Pies are going to endeavour to keep you abreast of all the confirmed moves, rubber-stamped loans and the most goddamn ludicrous rumours that crop up until the window shuts tonight – or at least until we can’t be arsed any more.

Also, feel free to leave your own spurious rumours and tittle-tattle in the comments sections. We’re all friends here after all.

18.36 – After nearly 11 hours at the incredibly dull coalface, I’m sacking this off for a bit. I hope you understand.

18.23 – Hearing that Blackburn have had a bid turned down for Leeds’ Robert Snodgrass. Is he the kind of ‘world class star’ that Venkys were bleating about when they took over?

18.18 – Marseille have confirmed that they turned down an ‘enormous’ £18 million bid from Spurs today for striker Loic Remy. Cripes! Seems like ‘Arry may have found a bit of spare cash from somewhere or other. Nudge nudge.

18.16 – Carlos Tevez is going to Boca Juniors…to play in Martin Palermo’s testimonial match at the weekend.

18.10 – Bobby Zamora’s speculative move to QPR is almost certainly not going to happen according to those in the know. He’s asked for £60,000-a-week in wages, presumably as he’s not overly keen to leave Fulham and is just trying his luck.

18.05 – Aside from the crap Sky Bet virals that are going around today linking him with a world record move to Barca, we are hearing strange rumours that Arsenal are going to make a late, late bid for Seamus Coleman. Could be a load of old poppyfeathers, but stranger things have happened (at Arsenal).

17.58 – At long last, some Forest transfer news to report! BBC Sport reckon that Danny Higginbotham is on his way to the City Ground. It ain’t much but it’ll do.

17.47 – Here are the deals that are still in the offing: QPR and Fulham have agreed a £4 million fee for Bobby Zamora but talks are ongoing, Louis Saha is waiting for Nikica Jelavic to sign on the dotted line for Everton before he can waltz off to Tottenham, Steven Pienaar may be returning to Everton on loan, Fulham are close to completing the signing of Pavel Pogrebnyak, Roma’s David Pizzaro is currently undergoing a medical at Man City and that’s about it at the moment.

17.41 – It’s been a bit of a slow one, but here’s a quick recap of the major transfers that have been concluded today: Wayne Bridge has joined Sunderland on loan, Djibril Cisse has joined QPR for £4 million, Vedran Corluka’s off to Bayer Leverkusen until the summer, Ryo Miyachi has joined Bolton on loan, Kevin de Bruyne signed for Chelsea for £6.7 million and West Brom have handed Birmingham £2.5 million for Liam Ridgwell.

17.22 – Just for the record, no fresh updates on the prospective Pienaar return yet.

17.20 – Sky Sports New reporting that Jelavic returned to hotel to ‘freshen up’ and will return later to conclude move to Everton. As soon as it goes through, Louis Saha will be able to join Spurs on an already-agreed 18-month contract.

16.59 – Fulham have had a loan bid for Chu-Young Park rejected by Arsenal. Possibly.

16.51 -TENTATIVE DONE DEAL:  Sky Italia are reporting that David Pizarro’s loan move to Man City is in the can. Talented little deep-lying playmaker but I’d have reservations over him adjusting to the cut and thrust of the Premier League. May take a few games to get up to speed.

16.44 – Former Arsenal man Alexander Hleb is on the cusp of joining Olympiakos from – and this blew my mind – Barcelona. Yep, he was still on Barca’s books before being released TODAY!!!

16.36 – Sounds like the ‘Jelavic to Everton’ move may be breaking down. Apparently he’s just left Finch Farm and returned to his hotel without signing. Clock is ticking.

16.16 – BBC are reporting that both David Pizarro (Man City) and Pavel Pogrebnyak (Fulham) have been granted work permits.

16.04 – File this under ‘we’ll believe it when we see it’ but a lot of sources are claiming that Man City winger Adam Johnson may be about to join Everton on loan until the summer. Bilyaletdinov and Saha out/Gibson, Jelavic, Pienaar and Johnson in? If Moyes pulls this off, he’s a transfer window GOD!

15.44 – DONE DEAL: According to the man himself, Djibril Cisse is now officially a QPR player after completing a £4 million transfer from Lazio. In fact, he’s currently on the train with the rest of the squad on their way to Birmingham for the R’s match against Villa tomorrow. 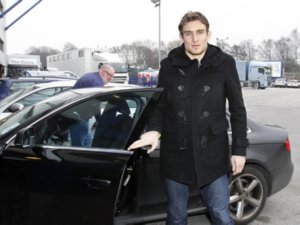 15.41 – Here’s a photo of Nikica Jelavic turning up at Everton to seal the deal.

15-34 – DONE DEAL: It sounds as though Louis Saha is perched and ready to join Tottenham on a contract that will run until June 2013. Interesting. Word is that Steven Pienaar will move t’other way.

15.10 – There’s a whisper on the wind that unloved Juventus winger Milos Krasic may be Tottenham’s VDV-style deadline day coup, with ‘the chairman’ firing off a fax at one minute to midnight. Still very much at the rumour stage though.

15.02 – DONE DEAL: We’re hearing (via the BBC) that Vedran Corluka’s loan move to Bayer Leverkusen has been signed off. Decent player, but no room to accommodate him at White Hart Lane any more.

14.54 – Apparently a ‘swap deal’ that would’ve seen Hugo Rodallega move to Fulham and Andy Johnson go the other way has fallen through. Sounds like Grade A bullhonky to me.

14.07 – Former Liverpool hair-monster Sotirios Kyrgiakos is on his way to Sunderland to undergo a medical.

14.04 – The ‘Defoe to Liverpool’ rumour just won’t go away. Undoubtedly a great deal for Liverpool (he’s a goalscorer, he scores goals) but if there’s any truth in it, we imagine it all hinges on Spurs signing a replacement. Saha? 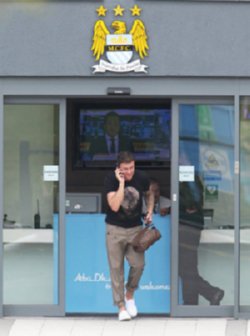 14.02 – DONE DEAL: Wayne Bridge (remember him?) has joined Sunderland on loan from Man City until the summer. Anyone remotely bothered?

13.53 – It’s all a bit slow on the transfer front at the moment. Only snippet is that Chelsea are said to be putting together an offer for 19-year old Sao Paulo and Brazil midfielder Lucas Moura.

13-07 – At his lunchtime press conference, Newcastle boss Alan Pardew insisted that the club have made their ‘last bid’ for Watford centre-back Adrian Mariappa – believed to be a shade under £5 million.

Hearing Liam Ridgewell’s move to West Brom from Birmingham is nearing completion. What are the odds he’ll have played for every single Brummie side by the time he retires?

Bolton have had a £6 million (yikes!) bid for Middlesbrough defender Rhys Williams rejected. Sure, he’s a classy centre-half, but £6+ million seems awfully rich, no?

Louis Saha to Spurs is happening! ‘Why?’ is quite another matter.

After hitting a roadblock in their attempts to woo Lucas Barrios from Dortmund, Fulham are now chasing West Brom’s Peter Odemwingie as a replacement for Bobby Zamora – who is QPR-bound.

Rangers have made an enquiry as to the availabilty of Grant Holt. Norwich have, predictably, told them to bollocks.

Word is Anzhi are also looking to take Man City centre-back Kolo Toure on loan for the rest of the season.

Good news for you jaded Gooners, Andrey Arshavin is in preliminary talks with Anzhi Makhachkala.

‘Zamora to QPR for £8 million’ is apparently a real thing, though Bobby is asking for ‘huge’ wages and the switch also depends on whether or not Fulham can tempt Dortmund’s Lucas Barrios to the Cottage.

A quick round-up of the rumours: Bobby Zamora is in talks with QPR, Louis Saha is either joining Spurs or re-joining Fulham on loan after leaving Everton training early and David Pizzaro is now within spitting distance of completing a loan move to Man City.

Blackburn have signed Marcus Olsson (Rovers player Martin Olsson’s twin brother) on a free transfer from Halmstad. The ‘Olsson Twins’ if you will.

Sounds suspiciously like one of ‘those’ deadline day rumours that do the rounds, but their is quite a buzz that Liverpool may be eyeing up a cheeky bid for Jermaine Defoe.

Seems that Arsenal have agreed a fee of £600,000 with Borussia Dortmund for 19-year old midfielder Thomas Eisfeld. A classic Wenger punt if ever there was one.

West Ham have entered negotiations over a deal for Bristol City goal-spelunker Nicky Maynard. Seems like the Hammers are going for it today, as they’re also chasing Barnsely’s Ricardo Vaz Te – a man in razor-sharp form.

You know you’re in for a slow Deadline Day when Andy Keogh’s move to Milwall is trending worldwide on Twitter, but I’m sorry to inform you that is the case. The striker has moved from Wolves on a two-and-a-half-year deal for an undisclosed fee.

DONE DEAL: Arsenal young’n Ryo Miyaichi has joined Bolton on loan until the end of the season.

Everton have agreed a fee with Rangers for striker Nikica Jelavic and, seeing as though West Ham had a £7 million offer knocked back a few days ago, it’s likely to be considerably higher.

Man Utd prodigy Ravel Morrison is discussing a permanent move to West Ham with the fee said to be up around the £300,000 mark

QPR defender Bradley Orr is having a medical at Blackburn. Exciting, no?

A few early bits and bobs to tidy up:  Kevin De Bruyne has completed his £6.7 million move to Chelsea, QPR are on the cusp of signing Djibril Cisse from Lazio for £4 million, Bolton have put in a huge £7 million offer for Crystal Palace winger Wilfried Zaha, Wayne Bridge is having a medical at Sunderland.