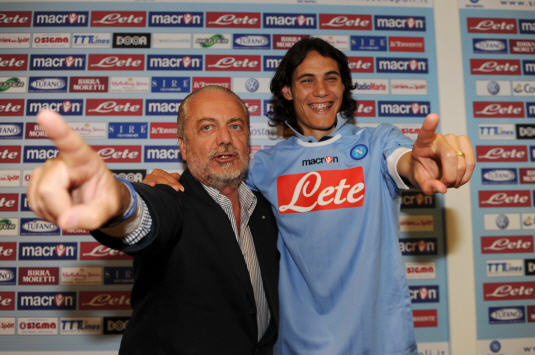 The eccentricity of Napoli’s film producer owner Aurelio De Laurentiis is well-documented; whether it be unveiling new players via the medium of rubber lion masks or storming out of ‘rigged’ Serie A fixture draws and pootling off into the sunset on the back of some random stranger’s Vespa, the man has got a fair bit of previous in the ‘well and truly barmy’ stakes.

Never one to conduct his business in a sober, forthright manner, De Laurentiis weaved the madness into his announcement that Edinson Cavani was signing a new five-year contract at the club on transfer deadline day yesterday – choosing to stage a brief scene in which the millionaire film producer pretended that Cavani was leaving Napoli for a club in ‘cold Manchester’, only to swerve the living daylights out of a room full of media types.

We have the minutes from the press conference, as taken by the PA newsfeed:

The new deal was announced at an elaborate press conference at which the Napoli president Aurelio De Laurentiis, a film producer, announced sombrely: “Sometimes, marriages come to an end. Unfortunately, Edi wants to go to England, to the cold city of Manchester. There’s a plane ready to take him there.”

Cavani replied: “What plane? I am staying at Napoli” before signing the new contract and holding up a shirt with 2017 on the back. He said: “I’m happy here. The club has been good to me, and I wanted to stay.”

Psych! Here’s the video – though sadly it’s not quite as doolally as you’d expect, with Cavani decidedly awkward in the supporting role…