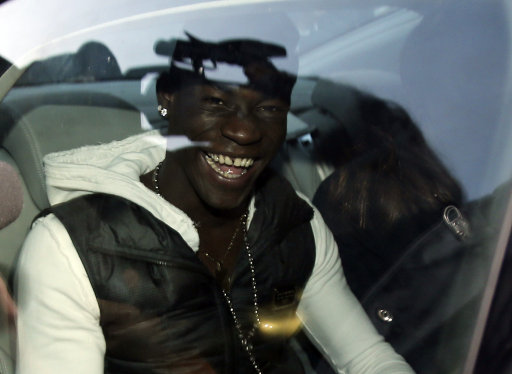 The BBC are reporting that “several hundred” AC Milan fans fought with riot police in the city last night after swarming en masse outside a restaurant in which new signing Mario Balotelli was meeting with Milan honcho Adriano Galliani.

It’s being reported that riot police began trying to forcefully disperse the crowd after flares were set off and bottles began to be thrown around the streets, before turning to tear gas to finish the job as Balotelli sat eating his chicken nuggets and chips inside…

According to Gazzetta dello Sport, one policeman was taken to hospital with head injuries after being hit with a bottle. Claims that it was Balotelli himself who launched the tear gas as a prank are, as yet, unsubstantiated.

While we’re on the subject of Balotelli, the man himself has been talking about his £19 million, four-and-a-half-year move to Milan, telling Italian media:

“I’d wanted to play for Milan for such a long time. Obviously I played for other teams and couldn’t come. But when there was the chance, I ran.”

Balotelli obviously ran to Milan a little too strenuously as it’s being reported in Italy this morning that he’ll miss this weekend’s game against Udinese with a pulled hamstring!