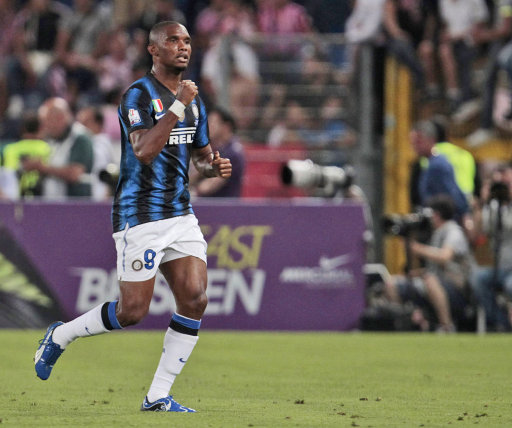 Unsurprisingly, Inter striker Samuel Eto’o’s open admission that, after two years at the Giuseppe Meazza, he now fancies a stab at life in the Premier League has set many-a gossip hound’s tongue a-wagging.

Have a gander at what Eto’o has been telling Il Corriere dello Sport:

“I am currently considering my options. I have one month to decide as to whether I want to stay put or choose to move to the Premier League.

“I am now 30 years old and it is very important for me to think about my future before I sign what could be my last contract.

“I have already shown that I have what it takes to play in Italy and I now have the idea of proving myself in England.”

Oh it must happen, it simply must – though quite where Eto’o will wash up if he decides to do one this summer is another matter.

Surely Arsenal and Spurs must do everything in their power to land him? Though you’d have to assume that Manchester United, Manchester City (especially if Tevez scarpers) and Liverpool, perhaps even Chelsea (just because they could) wouldn’t exactly be willing to sit around and let them go about their business in peace.