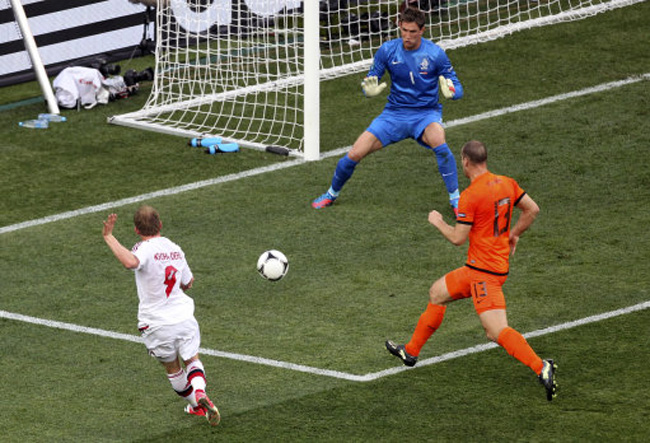 To paraphrase cutting-edge pop trio Bros, this shock result has put the car among the pigeons. The Netherlands dominated the game in terms of possession and indeed shots on goal, but just couldn’t put the ball in the back of the net.

That scenario is  something that Robin Van Persie will be well used to with Arsenal, with the striker failing to make the most of a number of chances. However, fellow attackers Arjen Robben (who hit the post), Ibrahim Affelay and Wesley Sneijder fared no better, as their failure to finish off the Danes had the predictable conclusion.

With 24 minutes played, nimble attacker Michael Krohn-Dehli latched onto a loose ball in the Dutch box before firing through the lers of Maarten Stekelenburg. Bert van Marwijk threw on Klaas-Jan Huntelaar and Rafa van der Vaart, but to no avail, as the Danes held on for a fantastic victory.

Back in Euro 1988, the Dutch also lost their opening game before ultimately winning the competition. However, if the Oranje are to do the same, they’ll need to start putting away their chances.