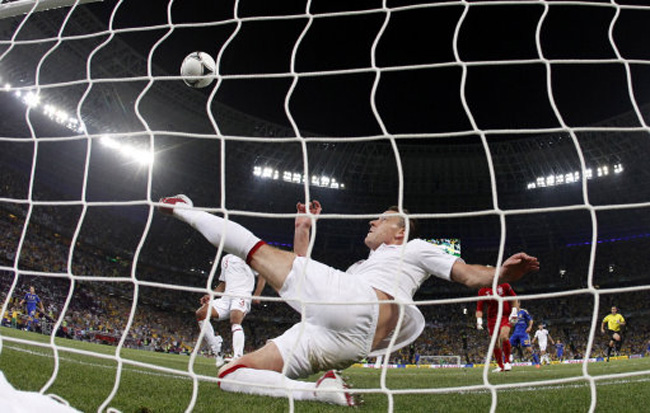 England produced another workmanlike display against hosts Ukraine on Tuesday night, with recalled hirsute hitman Wayne Rooney getting his big bonce on the end of a Stevie G centre to bag that all-important goal.

Rooney had missed a great chance before he finally found the net just after the break. However, for most of the first-half, it was Ukraine who bossed the game without finding a way past Joe Hart.

Despite conceding early on in the second-half, the hosts continued to push for a goal, and they got one (courtesy of Marko Devic) only for the officials to rule that the ball hadn’t crossed the line before JT hooked it clear. But it had. By a mile, which begs the question, what in the name of God was the extra official beside the goal doing? Anyway, there was an offside before the goal so it’s justice and all that. Oh, and it makes up for Frankie Lamps’ goal that never was in South Africa etc.

Anyway, the Three Lions held on and with France going down 2-0 to Sweden, Roy Hodgson’s men dodge Spain in the quarter-finals, meeting Italy instead. However, the question is – is that a good or a bad thing?

Oh, and get ready to observe as the English media get totally carried away again before lambasting the team when they lose to Italy (possibly).