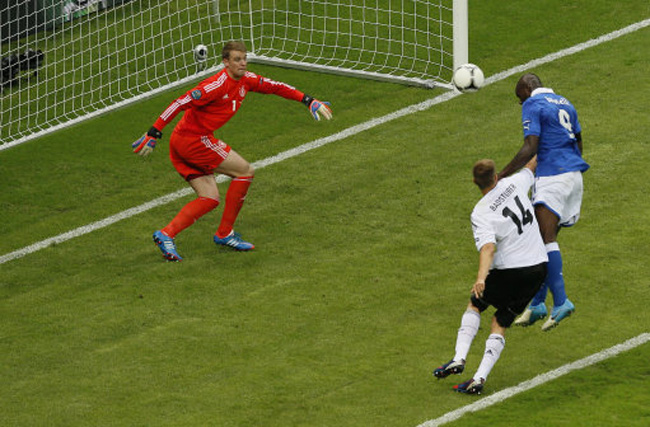 It had all been going rather swimmingly for Jogi Loew’s gifted German side, with a much predicted final clash against Spain in the offing. However, a stunning first-half display from Mario Balotelli for Italy tore Germany’s hopes of glory apart as Cesare Prandelli’s side outplayed a turgid looking German team.

The Italians were the better side from the off, with their midfield quartet totally dominant as Toni Kroos failed to nullify the magnificent Pirlo. With Balotelli and Antonio Cassano nipping at the heels of the German backline, the Azzurri started to dominate and were rewarded with a goal on 20 minutes after Cassano superbly set up Mad Mario who headed home. The Man City then doubled his side’s advantage 15 minutes later with a rocket strike after the German defence were torn apart.

Loew threw on Reus and Klose after the break but it was too late. The Germans did get something out of the game, courtesy of Mezut Ozil’s late penalty, but after looking superb in previous rounds, the Mannschaft simply failed to deliver against a superior Italian side.

Roll on Sunday’s final. Oh, and downhearted Irish fans such as myself can take a (teeny) crumb of comfort from the fact that the two finalists came from Ireland’s group!