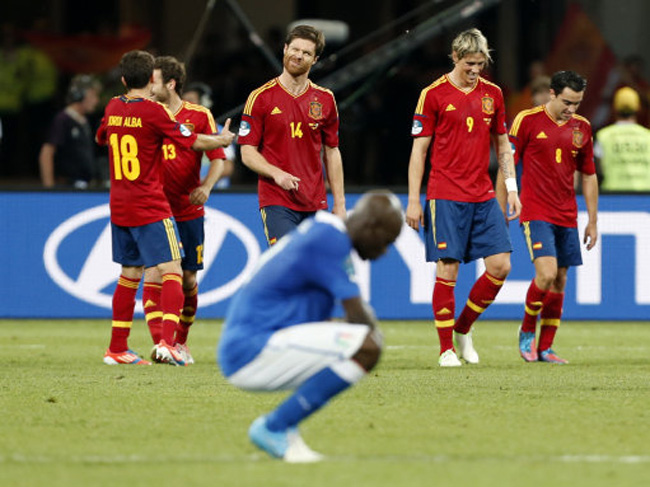 Questioned and criticised for a perceived over-passing of the ball without an end product throughout Euro 2012, Spain produced an outstanding, vital performance in the final against Italy which more than silenced their growing army of critics.

Vicente Del Bosque’s side bossed the first half against an Italian side who seemed to have hit the wall after an impressive Euro campaign. Losing defender Giorgio Chiellini to injury after just 21 minutes was never going to help the cause of the Azzurri, but goals from David Silva on 14 minutes and then a fine effort from Barca-bound Jordi Alba just before the break, didn’t flatter the outstanding Spanish.

With Spain’s six midfielders starving the great Andrea Pirlo of space to work his magic, the Italians faced a mountain to climb after the break. And then, any hopes of a revival for the Azzurri were dashed when sub Thiago Motta pulled up with a hamstring not long after coming on. With all three subs used, Cesare Prandelli’s side were forced to face the Spanish for the last half an hour with just 10 men.

Ultimately, sub Fernando Torres would score himself and then set up a goal for his Chelsea team-mate Juan Mata late on, as the reigning champions sealed the victory, a victory which puts them into the record books as one of the great sides of all time.

Poor old Mario Balotelli worked hard again but failed to recreate that two-goal performance against Germany, but with Italy revitalised under Prandelli, the 2014 World Cup could well end in glory for Mario and co. But for now, it’s the superb Spanish who deserve all the plaudits we can muster.