Last weekend, veteran playmaker Alvaro Recoba whipped in a trademark 30-yard free-kick in the fifth minute of stoppage time to give Nacional a dramatic 2-1 win over despised rivals Penarol in the Uruguayan clasico.

Now aged 38 and already a bona fide hero at Nacional, Recoba entered the game with 20 minutes left to play and duly cemented his legend status by curling home the match-winning goal with pretty much the last meaningful kick of the game.

Already beside himself with joy at getting to play alongside his footballing idol on a daily basis, Nacional youngster Gaston Pereiro immediately went out after the victory over Penarol and had Recoba’s face tattooed onto his forearm in tribute to the ex-Inter Milan forward…

” I found no better way to honour my idol than taking him everywhere with me forever,” Pereiro, 19, told Tenfieldigital.

“I am still screaming about his goal on Sunday!”

“When I showed the tattoo to ‘El Chino’ (Recoba), he could not believe it.”

“I started laughing and he joked: ‘Thanks for making me with hair and everything!'” – a reference to his gradually receding hairline. 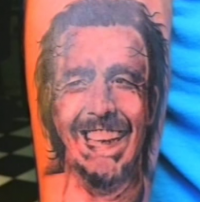