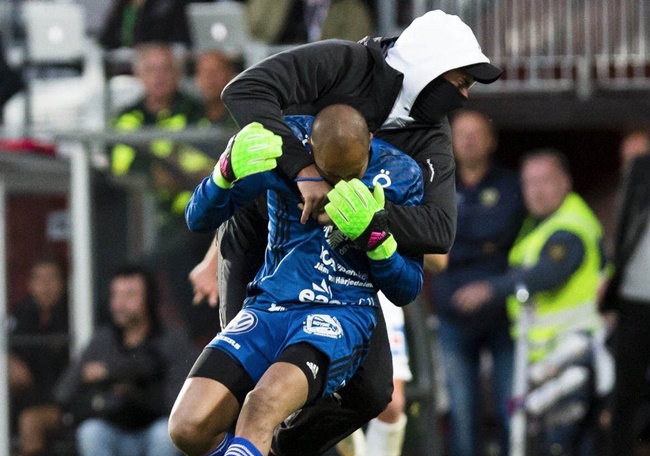 The Swedish top-flight match between Jonkoping and Ostersunds had to be abandoned in the last few minutes on Monday night after a fan rushed onto the pitch and blind-sided Ostersund goalkeeper Aly Keita.

The hoodlum came hurtling onto the pitch from behind Keita’s goal, chased him and then appeared to knock the Ostersunds ‘keeper over with a blow from behind.

While his assailant was swiftly dealt with by stadium security, Keita received treatment on the pitch but was left, according to match delegate Nicklas Bengtsson, “physically and psychologically damaged”.

Jonkoping police commander Peter Nordengard later revealed that after being detained, the 17-year-old hooligan also claimed there was an explosive device at the game:

He is under arrest, we have informed the prosecutor of the arrest and interviews will be conducted with him about the suspected breaches of the law.

Moron. The fan, you understand – not the Jonkoping police commander.