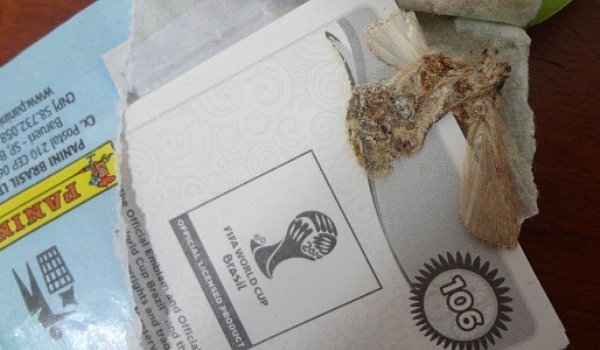 Spare a thought for four-year-old Guilherme Amarelo, who, upon opening a packet of Panini World Cup stickers recently didn’t experience the usual glee of finding Cheick Tiote or Jozy Altidore peaking out, but rather something altogether more traumatic for a child of his tentative years.

For you see, slipped inside one of the ten sachets given to Guilherme by his father as a gift was the mangled, decomposing cadaver of a moth.

“Dad, there’s a bug in here!” the poor traumatised lad reportedly yelled through to his father, Daniel, in the other room.

“I thought he had found something different between the cards, but it was an insect!” Daniel said.

“As I imagine, it’s not a common thing. I took some photos of the packet and I contacted the customer care services of Panini.”

Sadly, it looks like the presence of an insect carcass in his stickers has put young Guilherme off collecting the stickers altogether, with Daniel adding:

“It’s certainly not something that will stay forever, but while the memory is fresh, he doesn’t much want to continue [sticker collecting].”

After being contacted, Panini apologised for their little moth-stake (mistake…sorry), explaining that this is the first time in a quarter of a century that an insect has found its way into a packet of their sticker.

“There is no record of a similar case in the 25 years of the company’s operations in Brazil, but Panini will investigate possible causes of the incident.”

They also agreed to issue Daniel Amarelo with a full  refund for his troubles, so all is well in the world again.