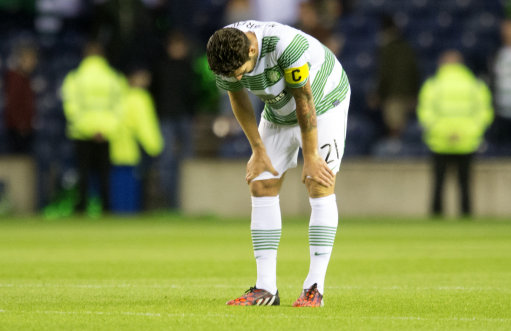 Despite getting their little pink arses paddled over the course of two legs, Celtic have this morning been re-instated to the Champions League after it was found their opponents in the qualifying round, Legia Warsaw, fielded an ineligible player at Murrayfield.

Bartosz Bereszynski, who came on as an 86th-minute substitute for Legia in the second leg on Wednesday night, was supposed to be suspended for the game following a red card in last season’s Europa League.

Having been spanked 4-1 out in Poland, Ronny Deila’s abject Celtic side went on to lose the second leg 0-2 at home to consign themselves to a hefty 6-1 aggregate defeat.

However, UEFA have since scratched the second leg result and awarded Celtic a 3-0 win, meaning the aggregate score now stands at 4-4 with the Bhoys going through on away goals at Legia’s expense.

Celtic will now go into the draw for the play-offs, i.e, the final hurdle before the lucrative promised land that is the Champions League group stages.

This is the second time Celtic have benefited from a cock-up like this in recent history, finding themselves reinstated to the 2011/12 Europa League group stages after initially crashing out in the qualifiers to FC Sion.

It later came to light that the Swiss side had fielded not one, not two, but FIVE ineligible players against them after breaching a FIFA transfer ban.