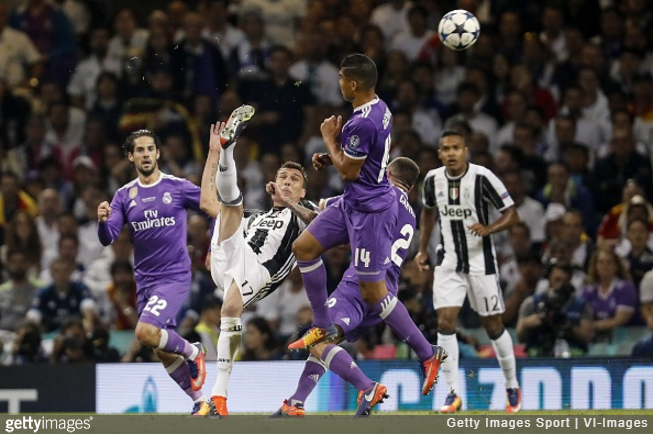 After Mario Mandzukic was controversially pipped to the 2017 Champions League Goal of the Season award, UEFA have bestowed their overall 2017 Goal of the Season trinket to the Juventus striker for his superb overhead effort against Real Madrid in the final.

Despite the ball not touching the ground in the build up and being scored against Real Madrid in the final and all, Mandzukic was beaten to the Champions League goal of the season award by Besiktas striker Cenk Tosun, whose similarly acrobatic effort against Benfica in the group stages took 41% of UEFA’s online poll.

By way of comparison, Madzukic’s volley scored against Real Madrid in the final garnered a meagre 17% of the vote.

Still, UEFA have righted their wrong by quite possibly inventing an award (honestly, who can keep up anymore?) to herald the Croatian target man’s finish, scored without the ball touching the ground against Real Madrid in last season’s Champions League final…

Mandzukic took the UEFA 2017 Goal of the Season plaudits ahead of Moussa Sow in second place and Casemiro in third.

By the way, this isn’t to be confused with the Puskas Award, which FIFA dole out to the most beautiful goal of the year every January.

In short, there are far too many different, devalued awards being given out and it’s bloody confusing.