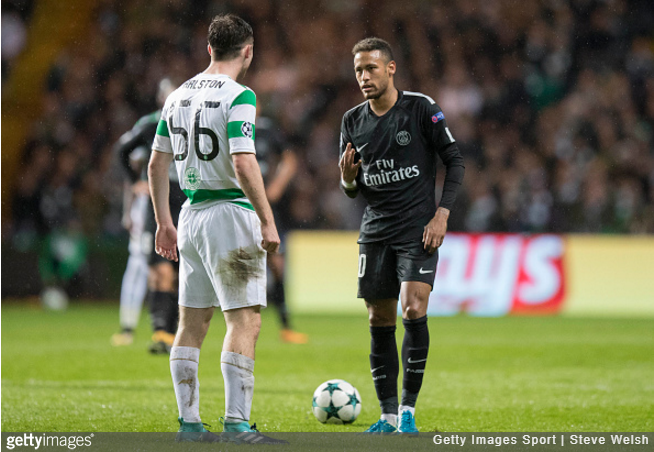 He may only be 18-years old, but Celtic defender Anthony Ralston has proved his isn’t remotely phased at having to deal with the uppity antics of the world’s most expensive player.

Something of a surprise selection ahead of Celtic’s Champions League opener against PSG, Ralston – on only his sixth full professional start – was then also given the unenviable job of man-marking Neymar.

While the Parisians ended up inflicting a 5-0 battering at Parkhead, the young right-back certainly did his best to rile the £200million Brazilian.

The animosity really sparked between the pair when, at 3-0, Neymar flung himself over a Ralston challenge only to be shown a yellow card for his post-dive whining and have the teenage Celtic defender laugh squarely in his face… 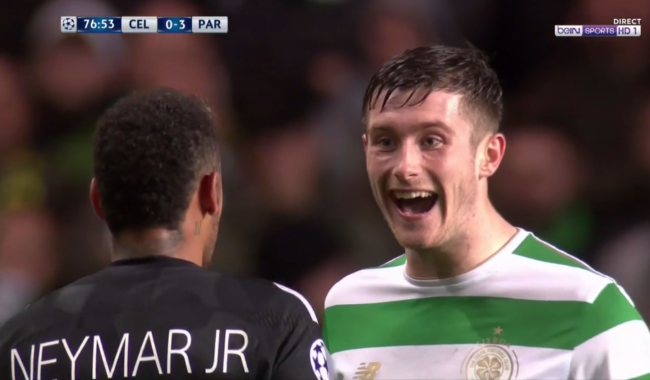 Neymar then duly responded by muttering something behind his cupped hand and waggling three fingers at Ralston like the petulant, bratty man-child he is.

The bickering continued for most of the match as Celtic eventually capitulated, Brendan Rodgers’ side slumping to their worst ever European defeat on home soil and conceding five goals at home for the first time since the late 19th century.

However, despite the trouncing, Neymar wasn’t willing to forgive and forget after the final whistle, with the PSG man refusing to shake hands with Ralston…

Not that Ralston was remotely bothered about the snub, with the Celtic academy graduate assessing the situation thus (via Daily Mirror):

It wasn’t a big deal. I won’t dwell on that too much.

Like I said, everybody is different, so I won’t lose any sleep over it.

Curse Neymar, and all that sail upon him.