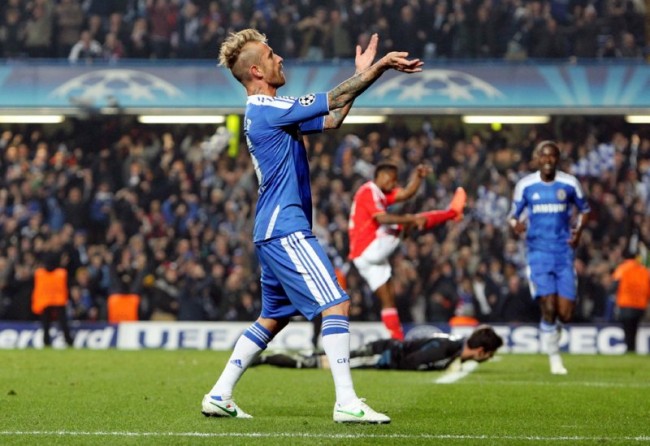 Having spent the majority of the tie 1-0 up (2-0 up on aggregate) through Frank Lampard’s 21st-minute penalty, Chelsea had to ride out what’s known in the business as a ‘late scare’ to secure themselves a berth in the Champions League semi-finals – when Javi Garcia’s 86th-minute header put ten-man Benfica within another goal of knocking the Blues out on away goals.

Ramires saw an open-goal go begging in the second half, while Benfica  – who had captain Maxi Pereira sent off after 40 minutes by anally retentive referee Damir Skomina (the chap Arsene Wenger was fined for complaining about) – were the better side for large swathes of the game; picking, weaving, creating but always falling a little short at the vinegar strokes.

Thankfully, Raul Meireles and the mangled, mangy Guinea Pig he takes with him everywhere atop his head defused a last five minutes of fraught panic (Benfica had a glorious chance to score, but Naff-o-tron Oliveira chose to spoon out for a goalkick rather than lay one on a gilded platter for Yannick Djalo) by breaking from his own half and cracking home a shot from 20+ yards to restore Chelsea’s clear aggregate lead.