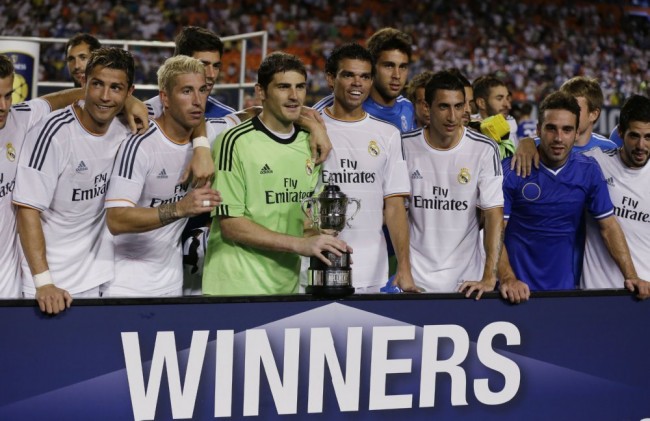 ‘Twas the final of the Guinness Super Friends Challenge Trophy Of Pure Unbreakable Friendship in Miami last night, with Real Madrid comfortably ousting Chelsea by three goals to one at the Sun Life Stadium.

Marcelo stuck a cheeky one through Branislav Ivanovic’s legs to put Madrid 1-0 up after 14 minutes before with Ramires pulled one back for Chelsea just two minutes later with a sweet, dinked finished over Iker Casillas.

With half and hour gone, Ronaldo then unleashed an expertly arched freekick into Petr Cech’s top corner to nose the Madrid ahead at the interval, before the Portuguese goliath went on to nab his second of the night on the hour mark, charging into the Chelsea box and finishing with a neat header…

You’ve got to give it to the man: when he gets them right (i.e, when he doesn’t clatter them straight into the wall at knee-height), they’re a real joy to behold.