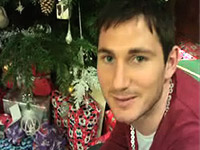 The always-excellent Kickette alerts us to the fact that Frank Lampard has his own blog, sponsored by Orange. It’s generally very bland but it does occasionally reveal some mildly interesting stuff about the World’s Second-best Player. Here are the top five pearls of wisdom from the pen of Super Frank (who incidentally is fit to play for Chelsea tomorrow – gasp, surely he wasn’t dropped by Steve McClaren?):
1 ‘John Terry will only wee in one urinal in the dressing-room toilets at Stamford Bridge. If youâ€™re at that one, heâ€™ll queue behind you even though there are others freeâ€¦’
Fascinating, Frank. What a lovely image.

2 ‘There’s one game I play with the lads on the PSP – SOCOM. We’re all linked up and we play against each other in groups – me, Shaun Wright-Phillips, John Terry and Khalid Boulharouz against Wayne Bridge, Ashley Cole, Arjen Robben and Didier Drogba. Our team is by far the best!’
What fun they must have together.
3 ‘Iâ€™m a big Christmas dinner fan and last year a good friend of mine – Marco Pierre White – sent someone round to help me cook it.’
World-class bit of name-dropping.
4 ‘I love giving Christmas presents, but it can be hard. I get nervous thinking about what I might get for people, especially Elen – my girlfriend – who is sometimes hard to buy for.’
Girlfriend in ‘hard to buy for’ shock.
5 ‘I’m listening to a lot of Razorlight at the moment – other than that it’s a mixture. Pre-game it’s like an R&B mixture that a lot of the lads listen to in the dressing room.’
Really? Tell us morâ€¦zzzzzzzzz.
He’s a very complex man.