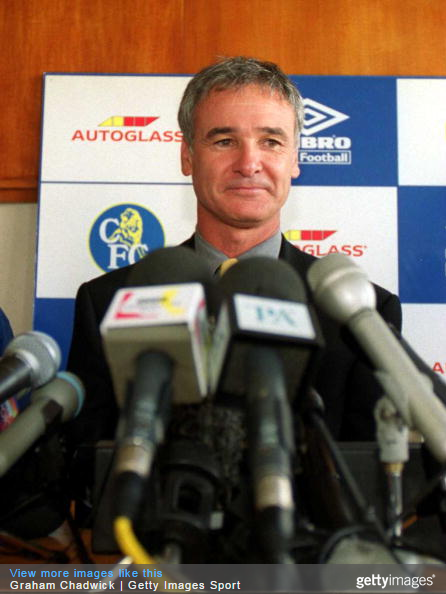 Three days after fellow Italian Gianluca Vialli was shown the door following a poor start to the 2000/01 season (one win in five – sound familiar?), Claudio Ranieri was unveiled as the brand new manager of Chelsea.

Ranieri had previously made his name at Valencia, where he won a Spanish Cup and took the team into the Champions League.

The Chelsea board wanted Ranieri to reduce the average age of the squad and he set about the task with gusto, incurring fan ire by flogging crowd favourite Denis Wise.

However, he also sought to integrate a dashing young centre-half by the name of John Terry, as well as bringing in the likes of Carlo Cudicini, Frank Lampard, William Gallas and Jesper Gronkjaer.

His tendency to heavily rotate his teams earned him the nickname “The Tinkerman”, yet he achieved steady success at the club. A 2-1 win on the final day of the 2002/03 season secured Chelsea a fourth-place spot, impressing a certain Mr Roman Abramovich so much he decided to buy the club.

Ranieri was then able to use the Russian’s huge wealth to bring in an array of stars including Joe Cole, Glen Johnson, Juan Veron, Hernan Crespo and Claude Makelele.

The coffers may have swollen exponentially but the bar for success was now set high and, in June of 2004, after finishing second in the Premier League despite being tipped for the sack from the very moment Abramovich took over, Ranieri finally got the push.

He had improved Chelsea’s points total season-on-season for four years, taken the club to its highest league position for 49 years, racked up a 52% win percentage and guided the Blues to a Champions League semi-final but alas, it wasn’t good enough.

Then some bloke called Mourinho took over.