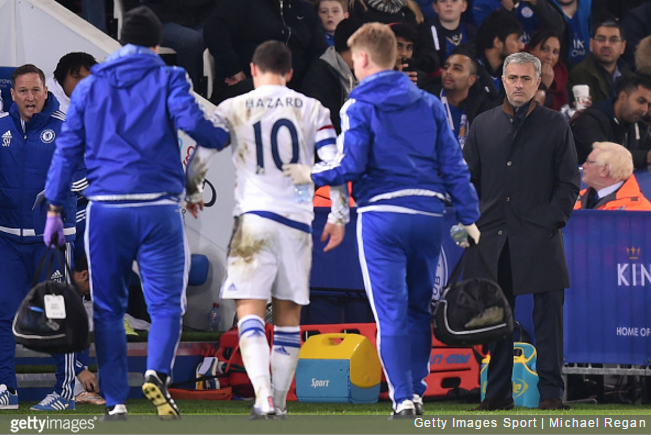 There were many observers (including Pies) who simply refused to believe Eden Hazard was genuinely in pain as he limped out of Chelsea’s embarrassing 2-1 defeat to Leicester City after just half and hour on Monday evening.

The dainty winger was tripped, seemingly innocuously, by Jamie Vardy and came floating delicately down to terra firma on his hip.

He then proceeded to pout and wince for several minutes before eventually sauntering straight down the tunnel and into the bowels of the King Power stadium, never to be seen again.

Rather pointedly, Mourinho said that the injury must have been “serious” to force Brave, Brave Sir Hazard out of the reckoning at such an early juncture. It was a bottle job. Hazard knows it. Mourinho knows it. We know it. Everybody knows it.

However, Hazard’s father, Thierry, has spoken up in defence of his son today, claiming that the Chelsea forward does in fact possess the most sensitive pelvis in anatomical history and is therefore genuinely suffering at the moment.

In fact, Hazard senior informed the Telegraph that his boy is in so much pain that he might not even make it back for this weekend’s game against Sunderland:

All those stories are invented. Do you really think that Eden’s going to fake an injury in such an important game? You all know him as someone who likes to play. As much as possible.

His hip is really hurting. It’s difficult to say if he’ll play at the weekend. But we hope he’s fit as soon as possible.

Eden has stayed pretty cool under his current form. All players have had periods where things went against them.

Eden keeps on working. Also for Jose Mourinho. They still get along.

Here’s wishing him all the best in his recovery.